It all started when I published a list of new ticket prices on my blog and one of them was El Mamela tombs at Esna. Someone emailed me asking for details of these tombs, well I had never heard of them personally. So they asked on EEF, there was no response there either so I decided to try and find out about them.

When I was going to Esna with some guests and a guide I asked him and he told me this was Ankh Tifi 1st Intermediate Period. So I published that on EEF and then loads of information came in. 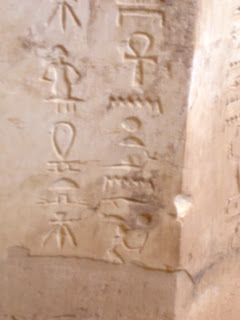 Firstly they are normally known as the Moalla tombs not El Mamela. Although that name was in the list of ticket prices the name on ticket itself was Al-Mu’alla, Esna but the important bit is that the owner was Ankh Tifi the brave. I just love that. And here are the hieroglyphics that say it.

No I have not suddenly developed complete knowledge of hieroglyphics but I went with a guest who has been studying Egyptology for years and had been help down at Dashur on the GPR project under Dieter Arnold. She had actually written a story about Ankh Tifi and asked if it was possible to see it. Michael from the roof came as well. Her name is Noreen Doyle and here is a link to a bit about her story www.noreen-doyle.com/Ankhtifi_the_Brave 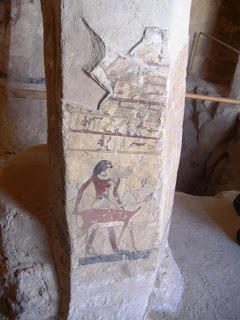 Right logistics of getting there. We decided to go with the Aswan convoy and blag our way back. Actually my driver (Ahmed my brother in law) found a way back that avoided the only checkpoint between Luxor and Said bridge (which is what the Egyptians call it).

So you could go there and back any time taking this route. We also bought tickets for Tod temple. So before you get to the convoy get the tickets at Luxor temple which will help explain to the policemen where you are going as they had never heard of it. You also get the Tod temple tickets there. 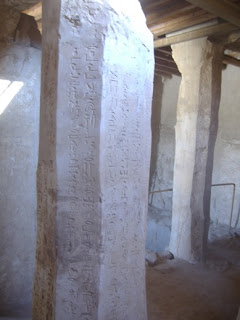 The convoy leaves at 7am and we got there about 8, we did have a puncture just as we arrived so we left Ahmed dealing with that while we went on the visit. This was actually good as he was told this sneaky way back which was quite complicated but really pretty going through tiny villages and sugar cane fields. 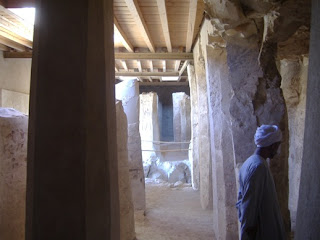 The site is visible from the road and is about 15 km before Esna, you will have to look out for it yourself or have a knowledgeable taxi driver as there are no signs and the convoy police did not tell us to turn off or have any interest when we did. Bless them. 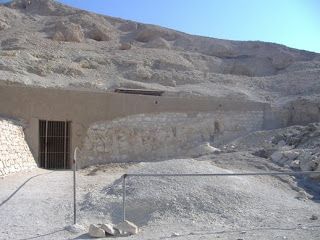 The guardian was on site no problem and took us up to the hill. Noreen told me there used to be a causeway leading from the tomb to the Nile. In front of it these days you can see remains of a mud brick pylon and a courtyard. The interior is surprisingly large with irregular shaped pillars. Apparently cone shape but they just looked irregular to me. 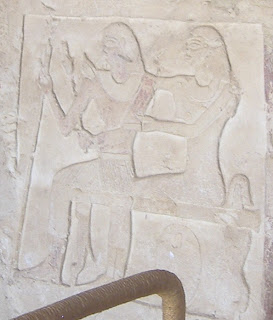 We found Ankhtifi's name and great pictures of him on his own and seated with his wife. There were also lots of wall scenes in various states of repair. There was a cartouche with the name of the king who Ankh Tifi had supported against the Theban alliance that produced the Middle kingdom. Noreen explained that the oars on the boat were one of the first examples of spoon shaped oars. 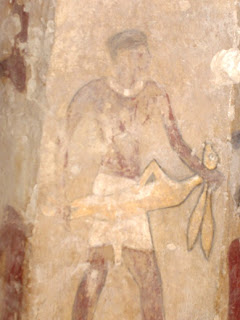 A nice scene of a man with a long eared hare looking very like Bugs Bunny. There were marsh scenes with herons and ducks, butchering, hunting, all sorts. The carving was interesting with glimpses of high quality work here and there but on the most part not of the standard of old kingdom mastabas of even Middle kingdom carvings.

There are a number of important texts in this tomb and it is unusual in that it departs from the standard texts with more personal accounts. This makes it a really important tomb. I would copy the texts here but there seems to be a debate about the proper translation and I do not know enough to select which one. He talks about starvation and even cannibalism which he relieved with grain and how brave he was. It is a very personal record

Here are few places he gets mentioned

This article discusses the punishment that would be inflicted on the potential violator of Ankhtifi’s tomb. One of his arms will be presented to the god Hemen, the god will no longer accept offerings presented by the victim and the family of the violator will be ousted from office. The article goes on to discuss the author’s theory that this actual means ‘death penalty in ritual disguise’.

A recent lecture at the Wirral Egyptology society by Dr Bill Manley discussed whether the reports by Ankhtifi of supplying grain to other parts of Egypt upset the theory of universal poverty, famine and a divided Egypt. The tomb is large suggesting wealthy and stability rather than chaos. Could it be the case of history being rewritten by the victors with the Theban Middle kingdom royals suggesting they were to solution rather than the cause?

Rather like ‘the causes of the first world war’ we probably think we know the reasons for the end of the Old Kingdom and the fall of Egypt into disorder and chaos; the old and feeble Pepi II losing control, the rise in power of regional rulers, foreign invasion, climate change and poor inundations resulting in famine, even the strain on resources from building vast pyramids.
Not so. In this interesting talk by Bill Manley we were made to rethink the First Intermediate Period in the light of recent research and reinterpretation of excavations. In the first place, the First Intermediate Period lasted about 150 years. It was only in the last 40 or so that there was the disruption of civil war.
The long reign of Pepi II (96 years gives us no suggestion that there was any weakening of his power. Indeed it is probable that this long period of stability would have increased prosperity. Petrie’s belief that there was foreign invasion has now been discredited.
There is absolutely no evidence of this. 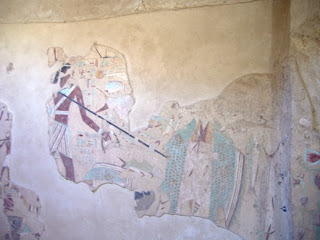 Undoubtedly this was a period of increased regional government, but there is little to suggest that this was in opposition to the Pharaoh, rather that this decentralisation illustrates the king’s confidence in his prosperous and growing country. That the country was affluent with a strong government is illustrated by the development of trade in the north and the rise in immigration from less stable countries. The regions were responsible for their people, the production of food and maintaining the military. The nomarch was no longer buried with his king in a pyramid complex, but built his own tomb in the regions near his own people.
If the country was poor, divided and threatened by famine, then the tomb of Ankhtify at Mo’alla is hard to explain. It is exceptionally large. The importance of reading inscriptions carefully and in context was clearly demonstrated to us. Apparently the suggestion is that famine was so widespread and severe that they were reduced to cannibalism, even eating their own children, but a close examination of the inscriptions shows that far from eating their children they were perfectly capable of looking after their own people and were exporting grain both north and south. Ankhtify says ‘it is my grain that has gone to Wawat and Abydos. All the south may die of hunger but it will never happen in this district’. So far from suffering famine, he was producing a surplus! 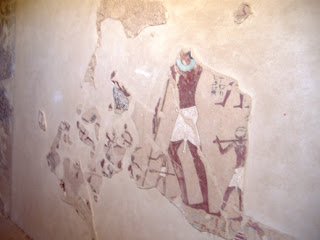 The rather crude art of the period is another reason often cited as a sign of the turmoil and decline of the period. It is now thought that this is more likely to be the result of the freedom of the regions from central control and their palace-trained craftsmen, resulting perhaps in more crudely executed art but with lively and innovative interpretations. There is evidence of distinct regional styles.
In addition the democratisation of the country meant that there was an increase in the size of the élite population. Many more people were buried in tombs; it was no longer the preserve of the very closest to the king. His officials and soldiers also had their own tombs, so high standards of tomb production would have been difficult to maintain. What Bill calls the IKEA-isation of tomb art. Also the poor geological conditions in some of the southern regions would have made the production of perfectly smooth surfaces in the tombs difficult.

The end of the First Intermediate Period was precipitated by the Thebans, who opposed regional development and wanted to take over control of the whole nation. That they succeeded, perhaps accounts for the view of this period that has come down to us. As they say ‘history is written by the victors’.


• The Dark Ages in Ancient History. I. The First Dark Age in Egypt
• Barbara Bell
• American Journal of Archaeology, Vol. 75, No. 1 (Jan., 1971), pp. 1-26
• Published by: Archaeological Institute of America
This article discusses in considerable depth the dark ages that Egypt went through and cites Ankhtifi as a great description of the terrible times they went through.
So all this based on Ankhtifi, and no I didn’t have any idea how important he was either

This is the earliest accessible tomb in the Luxor area, so quite different from the majority of New Kingdom sites, which are a century later. 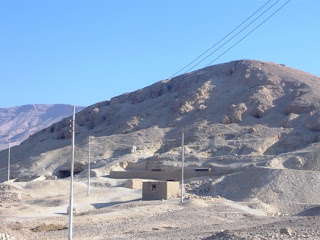 The area is a pyramid shaped mountain, Noreen had read of some speculation that it was an artificial pyramid but it did not look like that at all to us. There are quite a few obvious tombs. 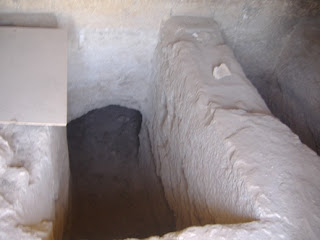 Another known one is Sobeknakht and we persuaded the guardian to let us take a look in there. It was a bit scary as there are three burial shafts right in the middle of the tomb, the quality of the decoration is poor. 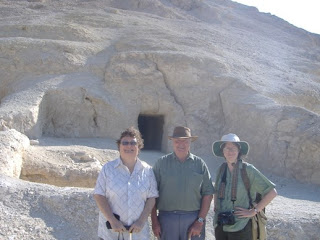 It was another tomb with an obvious courtyard in front; Noreen said that he was believed to be Ankhtifi’s father or grandfather although this is not sure. 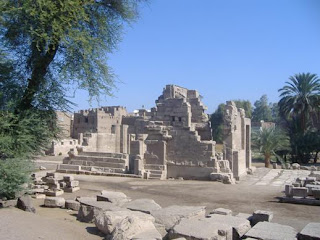 When we got back to the car Ahmed had sorted out a replacement tyre and found this sneaky way round the checkpoint. So we went to the temple of Tod. I have written about that a couple of times so won’t repeat myself but what are these? They look like Egyptian cartoon characters. 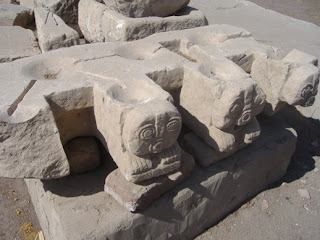 It was a great day out and we were back home by 11, it would have been a nightmare if we waited for the convoy as that does not come back until 2pm. If you want to go there contact me and Ahmed can take you the sneaky way.
Posted by Jane Akshar at 19:33

Email ThisBlogThis!Share to TwitterShare to FacebookShare to Pinterest
Labels: Ankhtify

Great piece on Ankhtifi Jane. Congratulations - it's good to see an informative and interesting article on these little-known tombs.
I love the new blog format by the way. Keep up the good work, I depend on you to keep me informed about what's happening in Luxor.