Report back on Valley of Kings and KV57 Horemheb

Well I went up there early this morning, in fact I was the first person in the valley. I went straight to Horemheb, quick before it is closed again. there was no indication from the outside it was open but later I noticed a number of guides who were telling their guests.

The tomb was fantastic, I won't bother describing it as you can get all that from the Theban Mapping Project but i enjoyed the well chamber, the fourth hour and the judgment scene the best. The patterns on the Goddesses dresses were gorgeous.

The tomb is quite large, lots of stairs and ramps. It was quite hot below and humid and I could see crack monitors, and what looked like a moisture monitor. 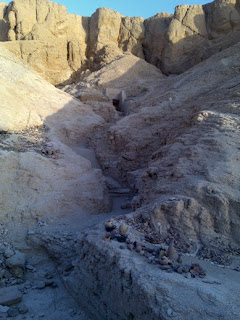 The valley has changed a lot recently. this picture was taken along the wadi to the tomb of Merenptah. You can clearly see the channel that was used in ancient times to keep water away from the monuments.

Also they have removed the inspectors office next to KV55 so obviously excavation is going to start there soon.
Posted by Jane Akshar at 15:56

Email ThisBlogThis!Share to TwitterShare to FacebookShare to Pinterest
Labels: KV57

I hope they will keep it open longer than a week. I so want to see this tomb!

I seriously suggest you write to Dr Hawass with your wish list. I red about someone who did this and got permission to go in loads of places. You never know if you catch him on a good day. Put a really good case together with lots of flattery. Fingers crossed

Thanks Jane, I´ll do that. It cost nothing to try =)

Exactly!!!! it is worth trying

Jane, any idea if the tomb will be open on thursday the 9th of july? Plus, if it is, is it necessary to pay an extra fee like for Tutankhamun's? Shukran

You don't have to pay an extra fee when I was there but I have no idea whether the tomb will be open that day. they just keep telling me they will see how the monitoring goes

i think everybody should go to valley of the kings this place
can't be missed i saw many only
coming to Egypt for tours in the pyramids but i think valley of the kings deserve same interest http://egyptguidelines.com/egypt-tour-packages/1-historical-tours/26-pyramids-a-valley-of-the-kings-tour-05-days-cairo-luxor-.html

Visited Tomb of Horemheb on 9th July,after many years of wishing for such an opening, a truly remarkable & beautiful tomb, definatelly one of the best tombs in the Valley.
Everyone should visit it, if they get the chance, not many of the guides know it is open, so if you want to visit it, you will have to tell them you wish to do so.

Hi Jane...when did they remove the inspectors office?