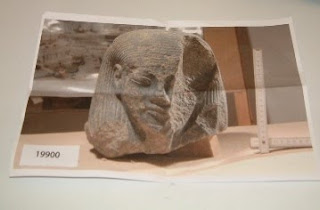 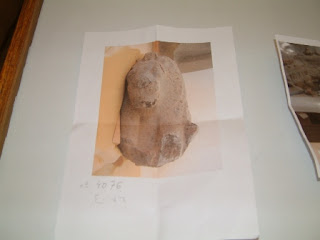 Times have changed in Egypt. I read on Facebook about the theft from the Amenhotep III storerooms and phoned Mostafa Wazery to find out what had happened. I immediately got the entire story and he invited me to go to his office. There he showed me pictures of the stolen objects. What a change from pre revolutionary days when everything would have to be referred to Cairo for permission. The story. At 3:35 am the 4 guards at the storeroom at Kom el Hetan, the area behind the colossus of Memnon were attacked. Two objects were stolen.. One statue was 38 cms high and a portrait of Amenhotep III the other was more damaged. Armed men attacked the guards with sub machine guns and chloroform, the guards defended the storeroom but were unable to stop the robbery. Mostafa Wazery was on site by 4am and has been there ever since. While I was there he was having to field calls from journalists and other interested parties. My Arabic is not good enough to understand what was said but it seemed he was getting tip offs. I know he is doing all he can to get the objects back. Just as I left Dr Hourig Sourouzian arrived so you can be assured everything is being done. Mostafa was so disappointed as up until now Thebes had been secure and he was proud of his guards for doing their best to fight off the attack. Three of them ended up in hospital. 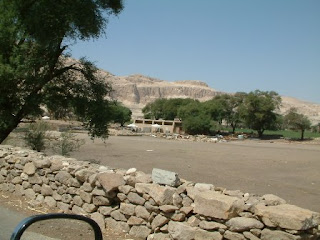 This is the storeroom where the theft took place. 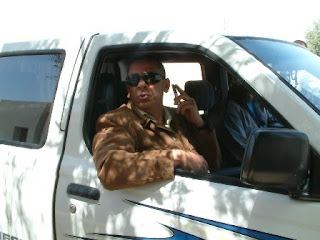 Email ThisBlogThis!Share to TwitterShare to FacebookShare to Pinterest
Labels: news in luxor

Thank you for posting these pictures of the missing artifacts so quickly Jane.
Warmest regards
John & Maria

It is thanks to Mostafa

Mostafa deserves credit for being open and transparent. The guards clearly deserve even more credit.
Thanks for the photos.

It's great to have you reporting directly from Luxor. A very sad story, which we all hope has a happy ending.

It seems that no site/ storeroom is that safe considering the steps the thiefs are prepared to take.

Organized and motivated, the thieves continue. Some of these may well be Egyptian born, so adds to the sadness of this theft.

Thank you so much for sharing this important information, and to Mostafa Wazery and his courageous guards' efforts to secure Egypt's heritage. To help outsiders better understand what help they might offer, could you possibly find out, first, who hired the 4 guards? second, were the guards themselves armed, and if so, who provided the weaponry and what weapons were they given? third, did the guards have any means of communicating to call for help from the military? fourth, would there be any way that foreigners who wished to could help pay for more guards (or neighborhood watch groups), more and better weapons, or any other security improvements?

I don't have those kind of details, I guess they would be internal to the Egyptian authorities. The guards employed by them

Thanks Jane, some good news before bed.

This has been really well handled by the authorities in Luxor. It shows what acting quickly can achieve while items are still local. It should also help to deter others.

I had a good feeling when I left Mostafa's office. At one point he threw everyone out and had a whispered conversation. I suspected he was being given a tip off