Thebes in the First Millennium BC conference in Luxor - September 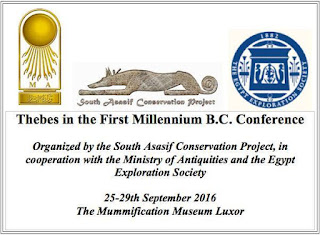 From the South Asasif Conservation Project


We are happy to announce that the program for the Thebes in the First Millennium BC conference is now available at the following link:

If you have any queries, please do not hesitate to contact us at conference@southasasif.com

The inauguration of the first phase that costed 200 million pounds was also attended by Mufti of Egypt Shawky Allam and the ministers of social solidarity, youths, international cooperation, expatriates affairs and tourism and the governors of Assuit, Sohag and Beni Suef.

They also laid down the foundation stone of the second phase of the project. The second phase include the establishment of a surgery department, research center and guest house.
Posted by Jane Akshar at 14:30 2 comments:


We had some students staying with us and they wanted to meet locals and practise their language. So we took one to meet Nubi Hussin Abd el Rasol (spellings vary). 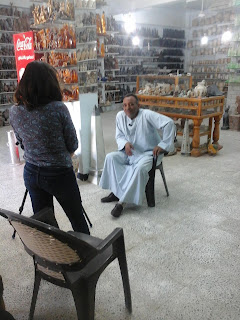 Of course I know the story of his family but it is much more interesting when he tells it and says my father, my grandfather and points to all these iconic pictures it really makes the history live. 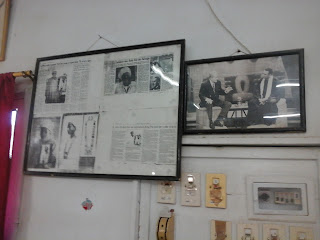 We start with DB320( aka TT320) the Royal Cache which was discovered by Ahmed and his brother Mohammed Abd el Rasul in 1871. Their sales of goods from this cache brought to the attention of the local authorities and set off an investigation by Sir Gaston Maspero, director of the Egyptian Antiquities Service, in the spring of 1881. This was Nubi’s grand grand father as he explained to us.

Jump forward to 1922 and the discovery of Tutankhamens tomb. Nubi’s grandfather is helping at the dig and there are photos to prove it. 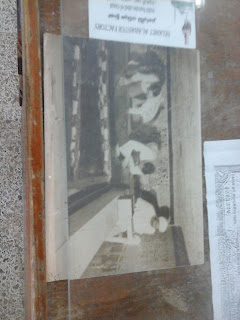 And Nubi’s father is the little boy who was photographed wearing Tutankhamen's pectoral. 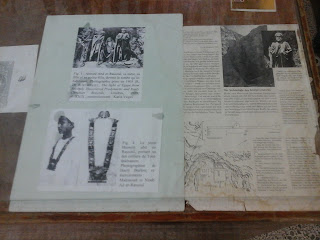 Listening to this story from the real life descendent is a special experience. If you want to meet any of this family  Nubi runs the Selkhet alabaster factory and one of his brother’s the Ramasseum café. We visited both places and she was able to see this living history
Posted by Jane Akshar at 12:49 No comments:

There have been many discoveries in Luxor over the past few years but
what is there for the tourist to see? Funnily enough there is a lot
that has been opened or made accessible.

Aswat Masriya - Entry to five Luxor tombs to be free till end of Sept - ministry: CAIRO, May 13 (Aswat Masriya) - Egypt's antiquities minister announced on Friday the opening of five archaeological tombs in Luxor for visitors free of charge until the end of September.
Posted by Jane Akshar at 16:56 2 comments:

Aswat Masriya - Entry to five Luxor tombs to be free till end of Sept - ministry: CAIRO, May 13 (Aswat Masriya) - Egypt's antiquities minister announced on Friday the opening of five archaeological tombs in Luxor for visitors free of charge until the end of September.
Posted by Jane Akshar at 16:55 No comments:

The opening of Four New Kingdom Tombs in Luxor... - Ministry of Antiquities

Minister of Antiquities Dr. Khaled El-Enany is to open today (Friday, May 13th) evening four tombs that belong to the Royal Butlers of Queen Hatshepsut from the 18th Dynasty and King Ramses II from the 19th Dynasty. The opening comes after the completion of their restoration works.

Dr. El-Enany states that the opening of the four tombs came within the framework of the Ministry of Antiquities' efforts to protect Egypt's heritage and to open new archaeological sites to promote tourism. He continued that the tombs that would be opened include tomb no. TT 110 of "the Chief Royal Butler of Queen Hatshepsut, Djehuty" which is located at Sheikh Abdel Qurna Area, on Luxor west bank.

The other three tombs are located at Deir El-Medina and belong to Imn Nakht (TT 218); Nebenmaat (TT 219) and Kha'Emteri (TT 220) who held the same title: "Servant in the Place of Truth" during the reign of King Ramsess II.

Dr. Mahmoud Afify, Head of the Ancient Egyptian Antiquities Sector said that Djehuty tomb is a T-shaped tomb, typical of the 18th dynasty with a pillared hall and a burial shaft. As for the three tombs of Deir El Medina, he added, belong to three members of one family: (Imn Nakht, the Father) ; (Nebenmaat, the eldest son) and (Kha'Emteri, the youngest son). The tombs share the same entrance, corridor and ante-chamber which are branched out into three burial chambers with a mud brick chapel in each.

Eng. Waadalla Abu El-Ela, Head of the Projects Sector said that the Djehuty tomb restoration project has started in October 2012 and included architectural and fine restorations because the tomb was in a poor conservation condition. He added that the project also included the consolidation of the tomb's walls, ceiling and columns as well as inserting new lighting system. Experts disagreed on whether ongoing radar scans would reveal the existence of a hidden burial chamber within King Tutankhamun’s tomb
Nevine El-Aref
Posted by Jane Akshar at 13:57 No comments:

Many, many, many thanks to Nigel Fletcher-Jonesfor these live updates copied from his facebook timeline https://www.facebook.com/profile.php?id=100008146188842&fref=nf . Do you read them if you can, as the comments are excellent.


... And we're off. El Damaty: recap based on Nick's paper. (September 2015) Found Plaster brushed on in parts of the burial chamber. Not the first time it was suggested that Nefertiti was buried in KV. But unlikely she was buried elsewhere than Amarna. Scan of three sides of burial chamber show something. IR thermography on north wall. Some differential but very low. New radar scan last month. Inconclusive results - too much noise. Need to continue and repeat radar scan and IR scan.

Nick: Nefertiti survived Akhenaten. Became pharaoh and buried in KV. Some Amarna evidence in KV. KV63 linked to Amarna period. Possibility of other chambers in KV62, possibly Nefertiti. Traces of precise vertical lines, not faults. Not a single tomb, like the second annex in the royal tomb at Amarna. Decoration of north wall similar to Amarna tombs. White ground on the north wall, not yellow. Female pharaonic figure? Mouth opening of Nefertiti as pharaoh by a young Tutankhamun. Second radar survey disappointing after the first survey. Further tests needed.

Dr. Watanabe: Back to my geophysical surveying roots for this one... November 2015 survey with ground penetrating radar (mounted sideways). Bit of an AV disaster, unfortunately. The first message is 'I've done this kind of thing all over the place, so...'. Uses high frequency pulse waves to detect anomalies. Images only indicate absence or presence, not actual shapes. Possible metallic compounds based on strong signals? Detected faults behind western wall. Straight lines of dots indicate something behind the West wall. Strong signals indicate metallic strips.

Dr. El Shayb: former director of CULTNAT now at Cairo University (civil engineer). Non-destructive / non-invasive techniques. Importance of calibration with regard to different types of underlying geology. Are the signals the same in sandstone, shale and limestone? We don't know. One survey says there are voids, the other says there are not. Need more scans including more IR and GPR. Plus impact echo techniques - using sound waves. Thorough 3D mapping and scanning from above the surface. Need control images from a known tomb. Possibly try it out on KV5.

Zahi: Not here to attack anyone, but this is inconclusive. The theory has become a fact. Carter didn't see anything at the time. Agreed that the tomb was planned for someone else. Nefertiti could not be buried in KV. The geological characteristics of the area around KV62 is well known and complex. The radar may be showing something else. Not possible to find tombs with radar. Need for the data to be available to the international community. Radar can't detect organic material. National Geographic survey showed no anomalies. A new chamber should be far more evident, particularly the door. Results not clear. Need more radar surveys. Need a committee to review data, and stop the media circus.

No more surveys on Tutankhamun's tomb until project discussed 8 May - Ancient Egypt - Heritage - Ahram Online: Minister of Antiquities Khaled El-Enany did not stop a radar survey on King Tutankhamun's burial chamber, as rumoured, but rather postponed all works inside the tomb until a scientific discussion is held 8 May