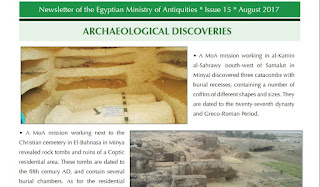 MoA_Newsletter_15_English.pdf
Posted by Jane Akshar at 03:03 No comments: 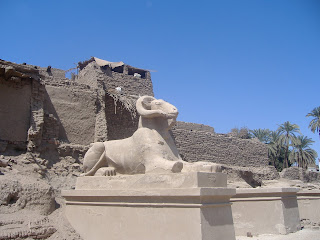 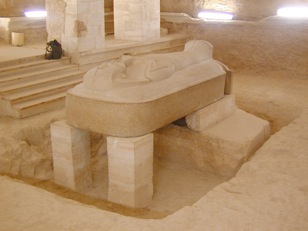 Lyla Pinch Brock is finishing up Ted Brocks work in the Valley of the Kings, we very privileged that she is staying at Flats in Luxor

When Ted sadly died he was still in the middle on things in the tomb. As his wife Lyla is a well known archeologist in her own right she is the perfect person to complete his work
Posted by Jane Akshar at 18:07 No comments: 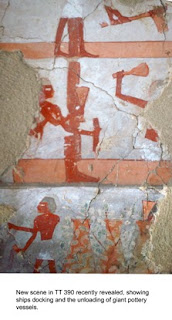 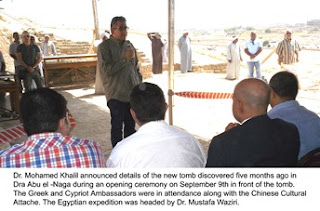 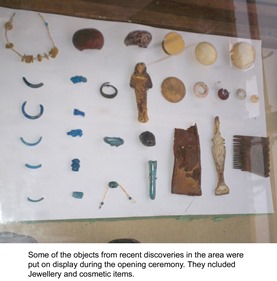 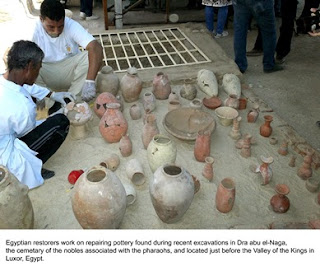 Today at Draa Abul Naga necropolis on Luxor west bank, Minister of Antiquities, Dr. Khaled El-Enany announces the discovery of a New Kingdom tomb that belongs to god Amun’s Goldsmith, Amenemhat (Kampp 390) and a burial shaft housing the mummy of a lady and her two children.

Luxor Governor, Mohamed Badr attended the announcement ceremony as well as Members of Parliament and a group of foreign ambassadors to Egypt, heads of foreign archaeological institutes in Cairo and top officials from the Ministry of Antiquities.

The discovery was carried out by an Egyptian archaeological mission led by Dr. Mostafa Waziri, Director General of Luxor who said that the newly discovered tomb includes of an entrance located in the courtyard of another Middle Kingdom tomb number Kampp150. The entrance leads to a squared chamber where a niche is found at its end. Inside it a partly damaged duo sandstone statue depicting the tomb’s owner and his is found. The statue shows Amenemhat sitting on a high back chair beside his wife who wears a long dress and a wig. Between their legs stands, in a smaller scale, a little figure of one of their sons.

Dr. Waziri pointed that the tomb has two burial shafts. The first one is located to the right of the chamber and probably had been dug to bury the mummy of the diseased and his wife. It is of seven meters deep where a collection of mummies, sarcophagi and funerary masks carved in wood along with a collection of statuettes of the tomb's owner and his wife.
The second shaft was uncovered to the left where a collection of 21st and 22nd dynasties sarcophagi was discovered but regretfully was subjected to deterioration during the Late Period.

In the courtyard, the mission stumbled upon a group of burial shafts which probably date to the Middle Kingdom. In one of them, the mission unearthed a family burial of a woman and her two children. It includes of two wooden coffins and a collection of head rests. The mummies of the children were found inside one the coffins while the second has the mother's mummy.

Sherine Ahmed Shawqi, Egyptologists who is specialized in bones said that early studies on these mummies show that the woman died at the age of 50-year-old and during her life she was suffering from several diseases. She suffered of cavities that led to an abscesses in her jaws; a bacterial disease in her bones.

"This woman probably cried extensively as the size of her carbuncular are abnormally enlarged," Shawqi said adding that inside the coffin the head-rest of the deceased woman was found as well as a group of pottery vessels.

The second coffin, she continued, has the mummies of her two children and early studies on them show that they belong to two adult males of age ranging between 20 to 30 year-old. Both mummies are in a very good mummification condition as the mummification liquids could be shown on their bones.

One of the male mummies shows that he was suffering from cavities during his life while the second mummy shows that it was probably put later in the same coffin because it was randomly installed and the bones were bare.

Archaeologist Mohamed Baabash said that during excavations, the mission stumbled upon several funerary objects, which some belongs to the tomb’s owner. Among the discovered artifacts are limestone remains of an offering table; 4 wooden sarcophagi partly damaged and decorated with hieroglyphic texts and scenes of different ancient Egyptian deities, and a sandstone duo statue of a trader in king Tuthmose III’s temple named “Mah,”.

The mission has also unearthed a collection of 50 funerary cones, 40 of which are evidence of the presence of other tombs belonging to four officials. The exact location of the later has not been yet found.