More on the Dayr al-Barshā discovery

On the website there is a very detailed press release which all lovers of FIP (First Intermediate Period) and early Middle kingdom will be very excited about.
Dayr al-Barshā Project: During its 2012 spring campaign, the archaeological mission of Leuven University in Dayr al-Barshā, directed by Harco Willems, has discovered an important burial dating back to the beginning of the Middle Kingdom (approx. 2040 B.C.). Although the burial has been robbed at least twice, and has suffered extensive damage, a large amount of objects were still found in their original position, providing unique information on the scenario of the funerary ritual. The tomb must have belonged to a nomarch (i.e.

Got my regular phone call from Mansour with lots of updates for the forthcoming season in Luxor.

As you all know the Temple of Isis at Shenhur.has recently undergone restoration and this is preparation for it being opened to the public. They are going to do some site management and it will probably open summer 2013. This is the only Roman building to Isis in Luxor and very significant.


The temple of Mut at Karnak is also going to open but this will be a bit sooner, autumn 2012, again they need to do some site management but less here as there is already a car park, toilets etc. But they do need to do something with the lake.

So something new in Luxor to look forward to on your next visit.
Posted by Jane Akshar at 08:30 4 comments:

A useful website for information about the Valley of Nobles, West Bank, Luxor.

Looking for a special meal in Luxor, try the Rosetta at the Hilton

I just had the best meal I have ever had in Luxor after 33 years of visiting and 9 years of living here, at the Rosetta at the Hilton. I knew the place had been refurbished and enjoyed cocktails there a year ago, being most pleasantly surprised by the decor. What I didn’t realise was that the food had been totally transformed. The standard is a million miles above that of its rivals(1886 Winter Palace and Al Moudira) and worth splashing out on. The Rosetta offers a buffet but this not your normal picture of rows of stale bain-maries, this was stunning buffet a la carte. First the starters, they have loads of individual dishes of the most scrummy dishes, I had four!!! including a cold soup which was superb. I chose the chefs special for main course and this was lamb fatta. The lamb was so tender and fell of the bone, the taste was perfect. There were loads of other choices, including vegetarian. Then desert OMG I think I died and went to heaven, I had five of those. You know how you can’t make up your mind and just want a little bit of everything, that is exactly what they did. Everything was just as it should be and the presentation was immaculate. To be honest nobody comes to Egypt for cuisine ....but now you can. I know where I will be recommending to friends looking for a special night out.
Posted by Jane Akshar at 00:49 No comments: 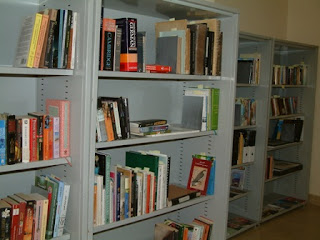 Dr Kent Weeks talked about the new library he has founded in Luxor.

The Theban Mapping Project Library is open every day 3-8 and everyone and anyone is welcome to use it.

Aimed at local Luxor people 3- 80+ who want to study or learn or just enjoy a book. 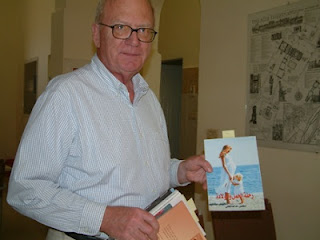 Kent very much hopes that local women will use it and has a number of Arabic books on childcare, pregnancy and nutrition.

He is particularly proud of the Egyptology and site maps given by the Getty Institute and World Heritage Fund.

He hopes that tour guides and trainee tour guides will use it to develop their knowledge but also Egyptologists needing reference material. There will be access to Jstore, the only one outside Cairo.

Here is a video of Kent giving us a guided tour. 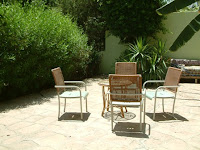 So far they are already getting local schools visiting, local women, members of ARCE and even tourists. There is plenty of seating area both inside and out. 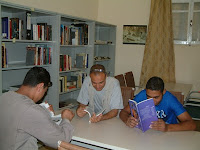 It is located on the West Bank, Luxor just before the main cross roads coming from the ferry. It is down the narrow lane that runs south, parallel with the main road, to the bridge. It is clearly marked with a sign and the building is green with mashrebeya windows. 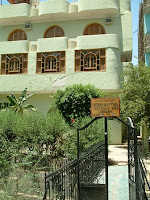 It the ground floor of the Arabesque House, part of www.flatsinluxor.co.uk and Kent kindly gives us a plug in the video. Access is across the canal, on a small bridge. There is a ground floor seating area as well as tables and chairs inside. 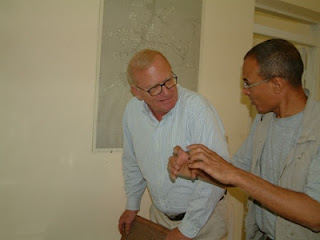 Ahmed Hassan, Kent’s right hand man in Luxor is in charge and can be contacted for any details. You can send me a message and I will pass on his phone number. Please especially tell any Egyptians you know. 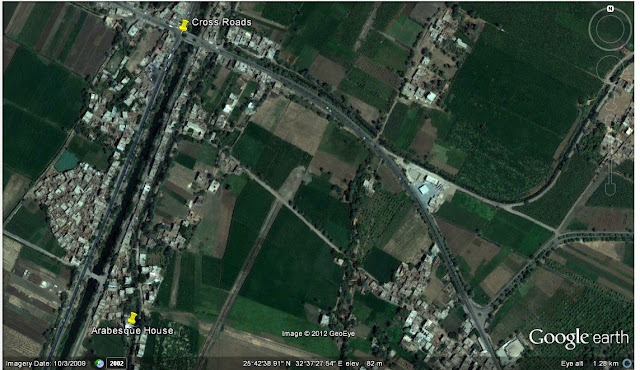 I am always plugging the Manchester online courses but for all you people from "down under" here is a local opportunity.

The Department of Ancient History at Macquarie University will be holding its next Ancient Languages School (MALS) from 2nd-6th July.
This week long school offers classes on Middle Egyptian (at elementary, intermediate, and advanced levels) and, for the first time, we are very happy to be offering courses in both Hieratic and Demotic. In the case of Demotic, this will be the only such opportunity to receive tuition in this stage of the Egyptian language and its script anywhere in Australasia.

Additional information for the programme, and how to apply, can be found at the following address:
http://www.mq.edu.au/about_us/faculties_and_departments/faculty_of_arts/department_of_ancient_history/macquarie_ancient_languages_school

Al-Ahram Weekly | Heritage | Much needed makeover for three goddesses: Meanwhile on Luxor's west bank restorers and workmen are hard at work at the temple of the goddess of rebirth and femininity, Isis, at Deir Al-Shelwit, four kilometres south of Medinet Habu. A development project similar to that at the Mut Temple is now being conducted by the MSA in collaboration with ARCE at the Isis Temple so that it too can be opened to the public next year.

Today the Isis Temple can be seen in ruins. It includes a small main building, the ruins of a decorated propylon and a well enclosed by a brick wall. The outer wall of the temple is plain, while the inner surface is decorated. The temple's shrine has a surrounding corridor with a chapel, an area for cleansing called a wabet and stairs leading to the roof.

According to inscriptions found on the propylon the temple was constructed in the first century AD, but there is a theory that the construction of the temple started in the reign of Pharaoh Nectanebo II (360 Òê" 342 BC) and finished during the Graeco-Roman period.

Mansour Borak, the supervisor of the Luxor antiquities, told Al-Ahram Weekly that the Isis Temple at Deir Al-Shelwit was of great importance because religious buildings dating from the Graeco-Roman period were rare in this area, where this was the only temple associated only with Isis and not with the gods of the Theban Triad (Amun-Re, Isis and Horus).

Borak went on to say that the reliefs of the temple were similar to those in Dendara Temple and on Philae Island. Cartouches of the Roman emperors Galba, Otho, Vespasian, Julius Caesar, Hadrian and Antoninus Pius were engraved on the temple and the propylon. The outer wall includes reused blocks from other ancient Egyptian structures bearing the New Kingdom reliefs.

Request from Osirisnet for photos of TT31 Khonsu

We would like to work on the Theban tomb of Khonsu, TT31, but we lack photographs from the scenes now behind glasses.
Many thanks to anyone who can  help us.

Thierry Benderitter
www.osirisnet.net
Posted by Jane Akshar at 21:44 No comments:

2012 report from the University of Basel team that discovered KV64 in the Valley of Kings, Luxor

Preliminary Report on the Work Performed During the Season 2012

Email ThisBlogThis!Share to TwitterShare to FacebookShare to Pinterest
Labels: KV64, Valley of Kings

Egypology Courses at Liverpool and Manchester

Liverpool Ancient Worlds Summer School 2012 (30th July 2012 to 15th August 2012) Archaeology, Classics & Egyptology at the University of Liverpool is pleased to announce the programme for the Ancient Worlds Summer School 2012. This year we will be offering both language and non-language pathways over two and a half weeks, covering many aspects of the ancient world; further details of the courses can be found on the website
All courses are taught by our department's staff and researchers.
Courses offered this year are:
'From Amarna to Deir el-Medina: Current New Kingdom Research at Liverpool'
'Ancient History and Archaeology: The Ancient Body'
Beginner & Intermediate Hieroglyphs
Beginner Coptic, Akkadian and Sanskrit
Beginner, Intermediate, and Advanced Latin Beginner, Intermediate, and Advanced Greek For further information, please visit the website at http://sace.liv.ac.uk/ancientworlds/summer-school/
And feel free to contact the organiser, Dr Glenn Godenho at ggodenho@liv.ac.uk
(Tel: 0151 794 2475)