I had a great morning at Luxor temple with Mansour Boraik. There is so much excavation going on in Luxor at the moment and one of the areas under investigation but not mentioned in his talk is the 'tell' behind the Pashas House. This is the last part of medieval Luxor left when the area was cleared decades ago, because of its proximity to the Pashas House. It is very early days and I can’t mention what they have found until official publication but what I did like to see was the field school in operation. They have a number of skilled inspectors who are passing their knowledge on to the new young inspectors. One of the benefits that Dr Hawass has brought to the inspectorate is making them a professional trained force; I have seen one of these field schools in operation at the Khonsu temple, and Mark Lehner led one in Sphinx Avenue. It is so nice to see these enthusiastic young men and women learning on the job.

This photo was taken from the road, so I am not breaking any rules showing it :) You can see the scale of operations. 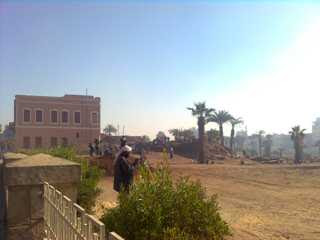 Mansour also took me over to the new entrance to Luxor temple. You now enter on the East side and when they made this new entrance he took the opportunity to excavate in this area. He found a small church made of reused blocks which he exposed. There were a number of talatat included in the walls. 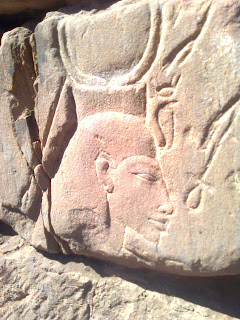 The first is an unusual portrait of Nefertiti looking like Akhenaton and the second is a picture of priest with one of the princes!!!! Yes I did ask him to repeat that several times, one of the princes. Could it even be Tutankhamen? Who knows but it was a very rare thing for me to see. 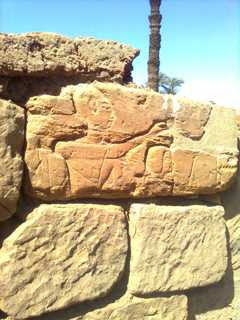 You can see these blocks as you enter the temple, just as you exit the bag scanning area it is immediately in front of you.
Posted by Jane Akshar at 16:38

This is really amazing, just waiting to see it

Wow Jane! You lucky thing.
Can't wait to get out there and see all the new excavations.

There are lots at Karnak temple as well

You're lucky with Mansour. Everey time i met him or had something to do with him, he was cold and official :-(

Oh my goodness, how did I miss this news? How very interesting!

didn't you have some other pics up? What happened to those?

You can check the picaso album for all the photos I have put up on Luxor News. http://picasaweb.google.com/jane.akshar/LuxorNewsJaneAkshar?feat=directlink