This is one of those little projects that comes from nowhere. When visiting the various temples as part of my disabled project I puzzled about this ramp at Deir el Bahri. It did not make logical sense to me to have the ramps at the sides and the stairs in the middle. I raised it in a great Facebook Egyptology group called the Hatshepsut Project.

This photo shows the ramp at the temple. Now the design puzzles me. Why have
a slope on the sides and steps in the middle. The gradient is not easy to walk, the steps are the wrong distance apart for an easy walking pace. 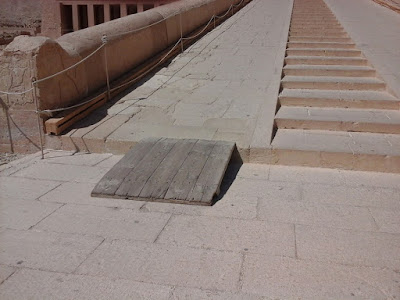 So if you were carrying a shrine along it at the beautiful feast of the valley the priests would have been walking on the slope and the shrine would have been over the steps. Doesnt make sense.


They wouldnt have been able to carry it in a smooth glide. Try walking
up that slope, it is so uncomfortable you have to stop. Surely it would
have made more sense to have a smooth central ramp with steps either
side. But even then the steps dont allow a smooth carrying pace.

Do we know if this is really the original design or an interpretation?

This provoked a great debate where we discussed it at length. Sometimes Facebook can be so interesting.  https://www.facebook.com/groups/hatshepsutproject

THEN Richard Sellicks shared a lecture that was being given at the Essex Egyptology group https://www.facebook.com/groups/311726865593790/ where one of the current team was talking. I begged him to bring the question up at the lecture. Which he did. Richards reply together with an early photo 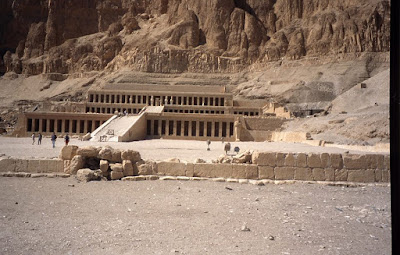 My picture from the early 90s and there was no stairway then! I spoke to Sergio Alarcón Robledo today who said it was not part of the concession and installed by the ministry!!

So my proposition was correct (I feel so vindicated).Big shout out to Richard for asking the question for me
Posted by Jane Akshar at 23:33