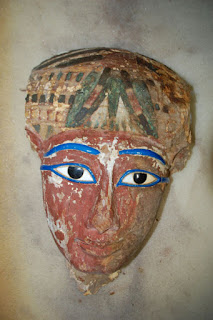 Antiquities Minister Khaled El-Enany is set to formally announce the discovery of two tombs at Draa Abul Naga in Luxor on Saturday, one bearing a painted wall.
According to a source who requested anonymity, the tombs belong to two top officials from the New Kingdom (16th to 11th centuries BC); the mummy mask of one of the deceased was also discovered.
In September the minister as announced the discovery of the tomb of god Amun-Re’s goldsmith in Draa Abul Naga.
The tomb had a rich funerary collection and a large number of ushabti funerary figurines, gilded coffins, mummies wrapped in linen and funerary mask and cones were unearthed.
Posted by Jane Akshar at 20:17