After my tour of Karnak Mr Mansour Boraik took me along the whole length of Sphinx Avenue, by car thank heavens as it was scorching. At the area just in front of Khonsu temple they have found further evidence of the embankment found outside Karnak temple. 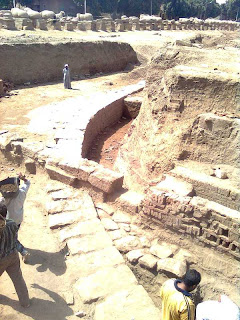 Mr Mansour said it has changed our perception of the Nile river bank in the times of the pharaohs. The scene on the back of the second pylon at Karnak shows the boats being pulled along by people on the bank. It must have been this very embankment which extended from Karnak to an unknown point. It disappears under housing but could well have extended to Luxor temple. This tells us so much about the procession between these temples. In the top of the picture you can see the sphinxes which go from Khonsu temple. He would be very interested in comments about this.

Further along near the airport road they have found a Nilometer. Very large with well cut steps. This has just been announced by the SCA. 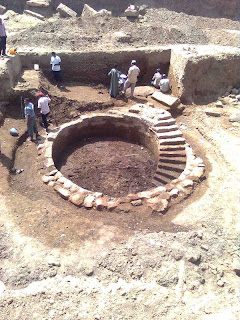 "The remains of a fifth century AD church and a Nilometer have
been uncovered this week during routine excavations carried out
by an Egyptian mission at the Avenue of Sphinxes in Luxor. (...)
Dr. Zahi Hawass, Secretary General of the SCA, said that the
remains of the church were found on the second section of the
path, which is divided into five sections. Archaeological investigations
revealed that the church was built with limestone blocks that
originally belonged to Ptolemaic temples. The blocks are very
well preserved and decorated with scenes depicting Ptolemaic
and Roman kings offering sacrifices to ancient Egyptian deities.
(...). One of the church's blocks contains information concerning
the 26th dynasty mayor of the Luxor area, Muntomhat (664-525 BC).
Dr. Sabri Abdel Aziz, Head of Ancient Egyptian department at
the SCA, said that at the avenue's fourth section, the mission has
also discovered remains of cylindrical sandstone Nilometer with
spiral steps. It is seven meters in diameter; inside, a collection of
New Kingdom (1569-1081 BC) clay vessels has been unearthed.
Mansour Boraik, General Supervisor of Luxor monuments, said
that a collection of foundation stones used to install sphinx statues
has also been discovered. Some of the stones are decorated with
scenes depicting King Amenhotep III (1410-1372 BC), who began
construction on the avenue of Sphinxes to connect Luxor temple to
Karnak temple. (..)"

In front of Luxor temple the line of sphinxes has been extended, these are all original, not reproductions. 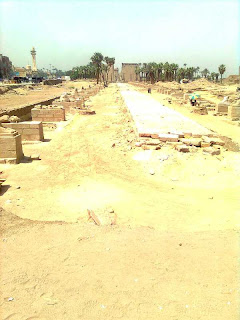 Sphinxes were used by many later eras from Romans to modern Luxorians. They are leaving the Roman structures in place. Kilns, wine making, churches etc all set between sphinxes. This is part of the history of the avenue and he wants to preserve it. Even the destruction of the sphinxes is part of the history. The church is built from reused blocks. 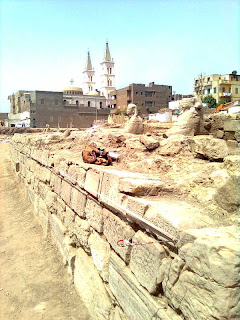 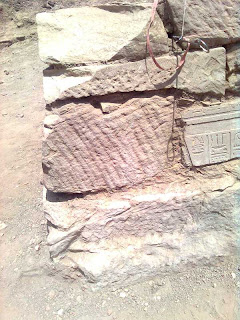 Here is a piece from the church showing crosses. 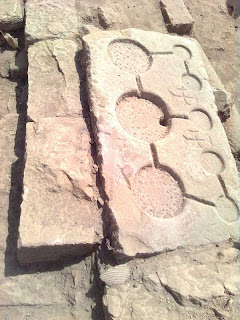 They are still finding loads of things as they excavate, objects, structures everything and anything. 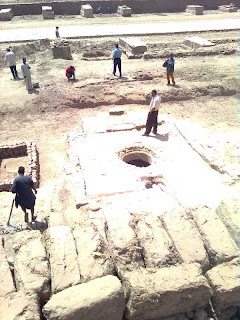 The last thing he showed me was the new site management. The site will be free, at various places there will be access points where people can walk down and see the sphinxes and the other remains. This is one behind the Susan Mubarak library. 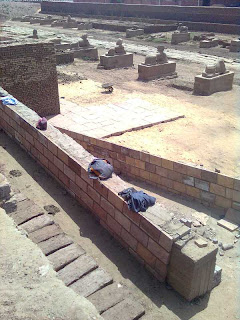 On the airport side of the avenue there will be a road and he is going to promote my idea of encouraging calaches to go along this road showing the tourists the sites. It is going to be illuminated. He expects the whole avenue to be open by the end of the year. They are going to open the Khonsu gate and there will be access from there.
Posted by Jane Akshar at 17:00

These updates are truely fantastic. You clearly have sonme great contacts (and probably a very nice tan!!!) and i for one appreciate the fact that you share your experiences with us. Most of the time if it were not for you (and Kate Phiz/Andy) most of us would be in the dark about recent events in Egypt.
Keep us up to date and let us know as soon as the church blocks have been investigated. It will be great to hear if more on this....

You are most welcome and thanks for the feedback.

I agree Kate(KV64) and Andie(Egyptology) do a fantastic job, I think between the three of us you get pretty much everything that is happening in Egyptology

Yes Jane- i agree with you. Between the 3 of you i have added that many bookmarks, favorites, etc that i actually have more reference material than i have time to look at.

I will always recommend you, Kate and Andy to anyone who requires reliable and enthusiastic information on AE.

I might add that i will almost definitely be doing the Manchester short course on the Queens of Egypt. If it were not for you, i would not know of such a course.

Where i go from here, i do not know, but you have provided the tools for me and others....and you do it out of your love of Egypt.

Respect where due- Life, Prosperity, Health to you.

Great information and photos, too. Much advanced since January when I was there. Thanks so much for posting!

Thanks for the updates ,we cant believe how things have changed since we were there in December,(sorry didnt get chance to speak to you at the lectures,it was busy )didn't quite appreciate how quick work gets done in Luxor, hope to be there in Oct/Nov.

Do you know if there is to be a programme of lifting the paving slabs to ascertain if they have been used elsewhere?