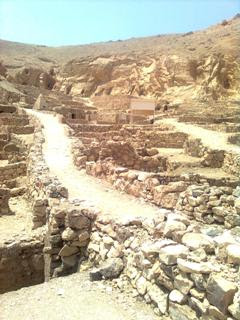 I must be completely mad I heard that TT290 Irynefer had been newly opened for tourists and instead of going there early I went at 12:30. It was hot, very, very, very hot but it was worth it. When you buy your ticket for Deir el Medina at the ticket office there is a sign up saying Sennedjem is closed for restoration and they have opened Irynefer in its place. Although the English is a little ambiguous lol. 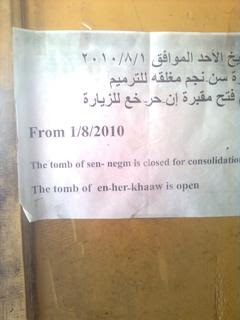 It is at the far end of the village and slightly up the hill. They have made a new shelter and sign for it. It is part of the normal Deir el Medina ticket and instead of Sennedjem which is being restored you get Irynefer. It doesn’t have any of that nasty plastic screening so please be careful with backpacks and brushing the walls if you visit. 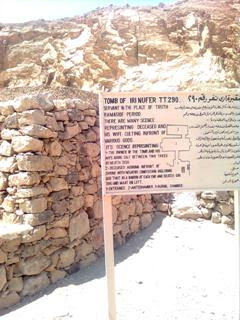 The burial chamber is barrel vaulted and very nicely decorated. The round walls are on the north and south ends and the entrance is in the East wall.

Along the north wall the owner and his wife are adoring and they are wearing very Ramaside clothing, his kilt has a high back and her dress is elaborately pleated. There is a figure of Kephri as well as a god I am not familiar with who was lying along the top of a shrine or pylon, had rams horns and a feather on top of his head. According to Porter and Moss it was Sobek. It was like a sphinx pose and there was a snake in a wave above his back. There was a sen priest behind Kephri who is seatd in front of an offering table. In the second register the deceased was adoring Osiris and two guardians at the gate . There are 42 judges (I counted) and they go around from the north to the west wall. Shu and Maat are seated on left.

Also on the west wall there are also snakes and feathers alternating with baboons representing Thoth at the end. On the curve of the ceiling there are several ibis headed gods as well as a lot of familiar Gods, including the goddesses Isis and Nephytys. The deceased stands in front of falcon (Horus) with a flail. Then the deceased is being led forward by Anubis to Osiris. Above that are 5 star gods alternating red and green faces with the stars next to them.

On the south wall there is a large figure of Anubis and a mummified body lying on a lion headed couch.

The east wall is the most interesting, there is a vignette of a silhouetted human figure, apparently the shadow of the deceased a ba bird and a ba bird in flight and a black sun. Then there is Hathor (according to Porter and Moss Mehitwert-cow) lying down beside a lake, then a winged Nut with a green body and a red dress with white ribbons, although her shoulders are square onto you one breast shows which is decidedly odd looking. On the bottom register there are two vignettes one of a mummy mask on a pylon and the other of a head rest on a pylon. Complimenting Osiris on the west wall we have Ptah with the deceased and his parents. The deceased is offering a large Maat figure. Then there are two white wigged figure of a man and woman his parents Siwazyt, a priest(Head of the bark of Amun) and Tausret, his mother both wearing very Ramaside garments. the parents are shown much larger size than the deceased due to their rank. The middle register has two trees with a red sun and the deceased and his wife, Mehytkhati, adore a white calf in-between the tress. In the bottom register there is a phoenix or benu-bird in a boat with the deceased with his son on the left. The top register has the deceased drinking from a lake in front of a palm tree, similar to Pashedu but the palm tree is in front in that tomb.


I had a lot of difficulty find any information about this tomb, especially with Chicago House being closed but did find this article http://www.egiptomania.com/EEF/Blindness.pdf which speculates that spell 135 is about a solar eclipse and is in this tomb. 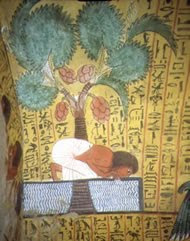 Osirisnet only has an intro, this image was an old cached one from Osirisnet but the current page says under construction.

Edited Ken Griffin very kindly sent me this "The tomb of Irynefer is published
Bruyère, Bernard and Charles Kuentz. La tombe de Nakht-Min et la tombe d'Ari-Nefer (= MIFAO, 54, 1), see especially Pp. 67-152." as well as directing me to Porter and Moss and I have given my description a good edit based on that info
Posted by Jane Akshar at 15:48

hello jane, thanks for the photos and info, as usual, facanating, love mary.xx

You may recognise me as "Shell" from Luxor4U forum :-)

I started to follow your Blogspot today and after a couple of hours at the beach, came back to receive this update!

Brilliant! Thanks for the information and I will be sure to show my "egyptophile" friend this posting when she comes to Cyprus for her holiday at the end of this month.

We're very much looking forward to our return to Luxor next month and I read something today on your Blog that interested me (for my husband) about your online course for Manchester. Would you mind giving me some more details? It's something he's extremely interested in and would make a fantastic birthday present for him at the end of next month.

Shell the details of the Manchester courses are here http://www.knhcentre.manchester.ac.uk/

You can see some information about TT290 here:

Thanks for those great links Stephen, the Tour Egypt one has some terrific photos

Hi Jane! I wrote about that "interesting wall" in this tomb for my Master's thesis in 2009. I argued that that black disk is a black-hole sun (as part of BD 92). Erik Hornung has written about black-holes in ancient Egypt. I can supply references related to this topic and the tomb if you'd like, but there is not much out there as you have come to know.

I am sure all my readers would love to learn more about this idea so thye could judge it for themselves so yes please feel free to add anything. As you know it all gets put into the search engines so it will be out there for everyone

Lindsey,
How can I get a copy of your Masters thesis? Sounds most interesting.
Charlie

A copy of my Masters thesis, entitled "Ba-birds, Shadows, and Black Hole Suns : Interpreting Representations of Spell 92 from the Ancient Egyptian Book of the Dead", is in the University of Memphis library. You can try to borrow it from worldcat.org. This topic was very interesting indeed!

It does not seem to be held outside the US Lindsey, could you send me a PDF

I will work on getting my thesis to you in PDF form as soon as I can. I work all weekend, and so it may be sometime early next week. Thanks for your interest.

Jane, I can send you PDFs of my thesis chapters today. What is your email address?

Dear Jane, I just published a page on www.st-maat.org on Irynefer's tomb and put a link to the post about your visit in summer 2010. You can view the page at http://xy2.org/lenka/Tomb290.html Hope it is all right with you! Kindest regards, Lenka

No problem at all, appreciate the link :)