Report of Thebes in First Millennium BC conference part 3

This consisted of site visits to TT223 Karakhamun TT391 Karabasken TT33 Petamenophis TT414 Ankh-Hor TT279 Pabasa TT312 Nespakashuty apart from TT312 I have visit reports or lectures of all these sites on the blog from previous posts, please search on the tags on the right hand side. The reports from the visitors were 1000% happy, they thoroughly enjoyed the talks and the onsite lectures. The food at Sheik Ali was also given a huge thumbs up, so well done them.

The morning was site visits to Karnak, again this was hugely enjoyed and the onsite descriptions given by members of the team were much appreciated. The afternoon we resumed at the Mummification Museum.

A three part presentation by Christophe Theirs, Pierre Zignani and Nadia Licitra. Although casual visitors to Karnak might not realise it there are huge stretches of the site that have not been excavated and gradually these are. The northern area is one of these, around the Ptah temple.

This picture of the model in the visitors centre shows the area and you can see just how much of the area is blank canvas. However these presentations put buildings in the blank places. 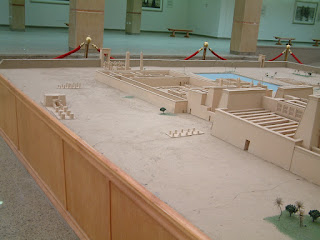 Christophe described the history of excavations from Legrain (1896-1900) and Chevrier (1932/34 1947/48) until today. He stated that the Ptah temple used to be a way station until the expansion of Karnak. This meant that it was subsequently altered by Shabaka with monumental gates and incorporation in other structures. He described the restoration of the gateway and how complex scenes were originally designed and altered.

Pierre stated the temple of Ptah has its own axis’s, the oldest part is Tuthmosis III, and the Ptolemaic extensions came about from the extension of the enclosure wall in 30th dynasty. Another gate has been found which connects with the Shabaka gate and reused talatat blocks. The also found the door jamb from the 17th dynasty with the name of Sen-Nakht-En-R which has been reported in the Egyptian press http://english.ahram.org.eg/NewsContent/9/40/35984/Heritage/Ancient-Egypt/Gate-found-in-Karnak-Temple-adds-new-name-to-ancie.aspx

Nadia went on the describe the Treasury of Shabaka, the know part of this structure was 12 columns but much more has been found including previously dismissed mud brick walls and two new rooms. The treasury itself had sandstone benches much of this remains.

The building activity of the God’s Wives of Amun at Karnak during the XXVI dynasty. New data from recent excavations and unexploited archives.

Presented by Laurent Coulon he gave a lot of detail about Osiris Wennefer Neb Djefau, why it was in that location, and its use as the processional way of the fetish. He also described the buildings in the area known as Naga Malgata (the place where things are picked up) which further north. A 26th dynasty building had been previous published by Pillet. There are so few remains that use has been made of archive photographs from Lyon. He believes one structure to be more of a ritual place than a chapel. The Griffiths institute archives have also contributed to his work. He also talked about the statue of Ibi Je36158 and related the 4 buildings described to his research.

Offering Magazines on the Southern Bank of the Sacred Lake in Karnak: A possible reconstruction of the Architectural Phases of the 25th and 26th Dynasty 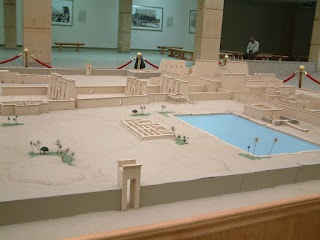 Aurelia Masson  described how the construction of the sound and light stage had meant rescue archaeology of the that area which discovered priests house, subsequently more excavation had been done and she looked at the relationship between the East and South of the Sacred Lake. Lepidus had documented a large monument, an Offering Magazine belonging to Psammuthes (can be seen in the model) built of mud brick with sandstone columns and doorways. She went into some detail about other buildings in this area the chapel of Thoth and Amun, a chapel of Shabaka part of which is in the Berlin which they has excavated and found lots more, a chapel of Osorkon which is located but not excavated. She then proposed a layout which incorporated all of this and made another offering magazine, actually she had two proposals. The pottery is from the 25th/26th dynasty and her idea is that this building had the same function as the later building.

Ceramic Production in the Theban Area from 25th and 26th dynasties: about new discoveries in Karnak

Catherine Deferernez talked about how the lack of stratification made dating difficult but typology is different she is beginning a classification of Late Period pottery. Stephanie Boulet went on to show the pieces recovered from three trenches under the chapel of the God’s wife of Amun and showed a series of slides illustrating the various types.

The development of graffiti practices in Karnak in the early first millennium B.C the case study of the temple of Ptah

Elizabeth Frood spoke with great enthusiasm not only about her project but the use of a new technique called Reflective Transform Imaging. She is using this software (open source code) and a snooker ball to look at blocks. It is enabling here to get all sorts of information from what look like undecipherable blocks. She suggests you look at this blog to get more information http://kathrynpiquette.blogspot.com/

She believes that graffiti was an elite activity and defines graffiti as ‘text or images on a temple or tomb wall that were not intended’. There are 100 known images at Ptah from Third Intermediate Period till Roman, not forgetting 19th century and a lost Coptic inscription. The south wall has the most with 18 blocks being inscribed. She intends to publish her work both online and in print because of this new technique.

The Lost Tombs Beneath the Houses of Qurna and el Khokha

Ramadan Ahmed Ali the Chief Inspector gave a talk about the consequences of the removal of the houses. He did not go into the politics of the action but just showed us the tombs that had been revealed amongst these were C14, TT 209, 137 136 385 29 32 183 48 185 and some unnumbered tombs. Although some are being excavated he welcomed more teams coming to work on these.

Mansour joked that the title was ‘Title to follow’. He talked about the embankment that had discovered at Karnak and the rich information this excavation had revealed. He went into some detail about the work of Taharqa and the possibility the big inundation recorded on a stele of Taharqa (21 cubits in front of Waset) might have been the motivation for the building for the ramp at a different angle.

Elena Pischikova then gave a short presentation thanking all her people. I videoed some of it but missed the beginning when Ken Griffin and Trisha Mason were thanked. She showed some lovely photos from the entire season. Some of those volunteers managed to come back to help with the conference and she stressed what a massive help they have been to the smooth running of the conference.

Tony Browder who fund raises for the project in America gave thanks to Elena and the project for the educational work they do. http://www.ikg-info.com/ 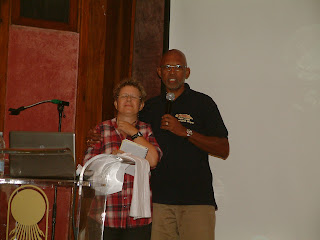 Some other people spoke giving thanks like Julia Budka but the most surprising was a lady from Mehen Studycentre for Ancient Egypt http://www.mehen.nl/ who was with a small group, she announced a donation of 1000 Euros for both Elena and Claude Traunecker TT33. I wish you could have seen Elena’s face as this was announced, most of these missions work on a shoe string budget and the smallest donation is massively appreciated. If you would like to make a donation to help this excavation please go to this page on the website http://southasasif.com/Become-a-Sponsor2.html


So this part 3 of my report just the gala dinner at Luxor Temple to go
Posted by Jane Akshar at 17:47