Tonight was the official opening on the new exhibition at Luxor Mseum from the 'The Colossi of Memnon and Amenhotep III Temple Conservation Project’, led by Hourig Sourouzian. There was one part that was actually outside in the floodlit area and the rest was in the special temporary area.

This is a very special project, the largest temple in Luxor, where everyone thought there was nothing but 2 large colossus has been revealed by Dr Hourig  to have much much more than anyone thought. It is a huge project, employing one of the biggest teams of local workers ever assembled.  On the west bank there are lots of story boards explaining their work, the Northern colossus have recently been reassembled and now this temporary exhibition reveals even more. 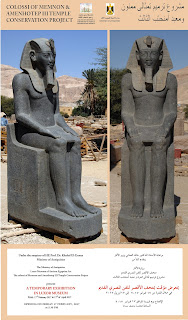 I went there on my trusty mobility scooter to try out the disabled facilities. My taxi was able to stop at the south end of the pedestrian area and I trundled along quite happily. The entrance to the museum had a ramp from road to pavement. The people at the ticket office let me in the exit as I couldn't go through the turnstile, they were quite happy to do that. The grounds were easy to negotiate. There was a step into the museum but I suspect this will have a ramp very soon because the museum director was there because of opening she saw and discussed the problem with me and she seemed committed to resolve it.In the meanwhile helpful staff lifted the scooter into the building. I skipped the turnstiles, going in the exit. Inside slightly to the left there was a nice gentle ramp to the upper levels and by using it and going down the other ramp you could avoid the set of steps in the entrance. There was a wheelchair lift inside, between the two sections of the museum but it was not suitable for the scooter but yet again willing men leapt forward to assist me. The only area with only steps was the small area of court du cachette area but everything else was super accessible either by ramps or willing men.