Day Trip to Dendara on the Lotus Boat

Yes another first for me. I had been wanting to revisit Dendara for ages as we had a lecture showing the cleaned surfaces and I wanted to see it. So I was offered a treat taking the boat to Dendara. Again this was something I had meant to do but it got cancelled and I never rebooked so finally I got to go. The Lotus is operated by the Iberotel and you can book direct or through an agency. 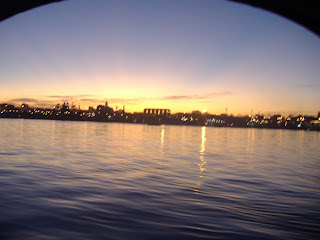 You start early, yes early enough to catch sunrise. I went by motorboat and picked up my friend from the Sheraton and the motorboat took us direct to the boat. You actually climb on the roof of the motorboat and get on that way which was quite funny. All the other people coming from the East Bank dock and queuing up and us getting in the back door. 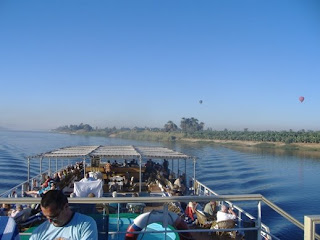 We got a seat on the top deck which was a great view but a little cold, especially at this time of year. We had jackets and huge Egyptian scarfs but there were some mad tourists in sun dresses and bikinis huddled under towels lol. 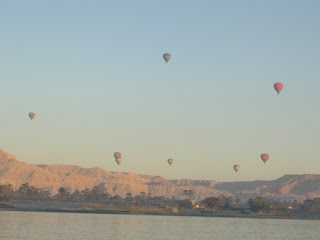 You could see the hot air balloons doing their sunrise tour. 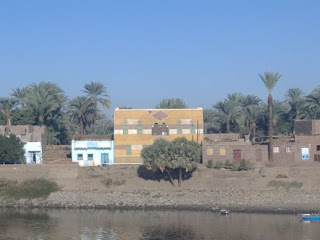 It was wonderfully drifting along, watching the life and waving at the locals. Waiters went round offering tea and coffee and there was a real east end street trader reincarnated as an Egyptian selling all sorts of bits and pieces. Quite amusing and no hassle

If you are not catching up on seeing each other after 2 years like we were you might appreciate a book. They did actually have some on board. We left Luxor at 7am and arrived at Dendara about 11. 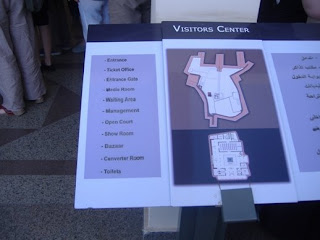 Included in the price was a coach to the site and a guide. There is a new visitor centre since I was last at the site and there was a short film shown. The site is now well labeled. 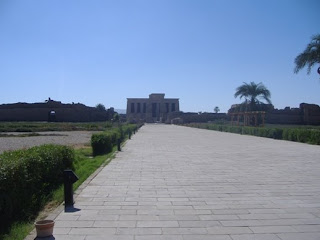 I have to be honest and say the guide was awful so we quickly ditched him and made our own way around. There were three coaches and 3 guides so we might have got the duff one. The courtyard in front of the temple has some nice piece including this gorgeous Bes. You can also see the birth house and sanatorium 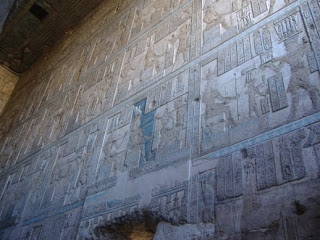 The cleaning was totally fantastic, the colours are really being revealed and look fantastic. When the whole temple is done it is going to be fantastic. 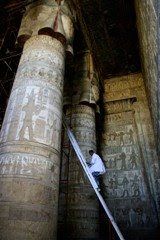 It is still going on so some of the ceiling was obscured by scaffolding. We were invited up to have a look but I am sorry no way was I going up that ladder.

Well worth seeing and we had a look round all the temple except the back where Cleopatra VII is shown with Caesarion. 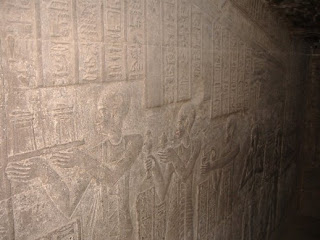 We managed to get on the stairs by ourselves and made our way up to the roof. It is amazing the see the well worn stairs and think of the processions of priests that have been up and down that stair carrying their offerings and shrines up to the roof. 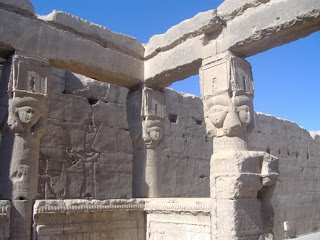 As Hathor was the daughter of the sun God lots of her ceremony's would have taking place in the sun. There is a small open air chapel on the roof and some fantastic panoramic views of the temple surrounds and the country side. 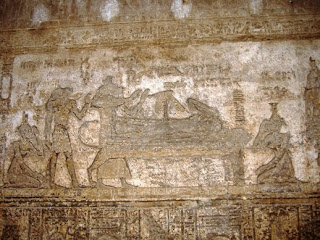 Other rooms on the roof celebrate the story of Osiris. The plaster copy of the zodiac ceiling now in the Louvre. another ceiling with Nut. Here is an Egyptian sex scene!!!

Then we got in the coaches back and on arrival had a great lunch also included. Beer and wine were available and then it was back to Luxor. It had warmed up a lot so the bikinis came out, not mine I hastened to add but I did take my socks off. Tea and cake was served at 5pm also in the price and we arrived back at 7pm. It takes a lot longer to go back because you are against the current. Our motorboat was waiting for us so we exited the opposite way to everyone else getting off on the gangplank which was quite good. Great day out and thoroughly recommended
Posted by Jane Akshar at 10:15

Email ThisBlogThis!Share to TwitterShare to FacebookShare to Pinterest
Labels: Dendera

Great day I'm sure but how much cost this cruise ?

Thanks for an interesting blog and account of the day trip to Dendara. I found you at Luxorguide dot com whilst doing a bit of background for our first visit to Luxor next week. Could you possibly give a brief recommendation of how best to enjoy 7 days without going ott?
The boat trip (as sara asks "how much"?) looks like one of them and a balloon at dawn sounds like fun.
Thanks again

Please email me if you want any details jane.akshar "at" flatsinluxor.co.uk