Caught this on Twitter, 40% discount on flight Luxor to London. 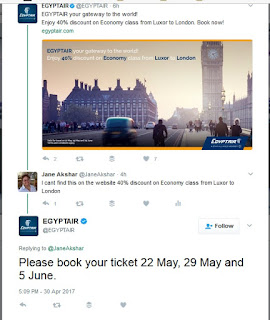 The ceremony was attended by a large number of ambassadors of foreign countries, diplomats, media personalities, and over 200 public figures, including Egyptian scientist Farouk al-Baz; American actress Vanessa Williams, known to love Egypt; and businessman Amr Badr.
Posted by Jane Akshar at 15:58 1 comment: I have my meeting arranged with the Ministry rep to show him the current situation at the sites. Also Joanne Stables is helping me and has made some useful contacts re mud brick use to make sites accessible.

Shenouda sent me a copy of the paper he presented and in it he quotes me.

I have to admit to being pretty excited, this might actually happen!
Posted by Jane Akshar at 21:39 No comments:

Egyptian archaelogists unearth tomb of 18th Dynasty magistrate in west Luxor - Heritage - Ahram Online: The Egyptian Archaelogical Mission announced on Tuesday that it has discovered a major tomb in Luxor dating back to the18th Dynasty and containing priceless artefacts.


* MoA press release:
"Tomb of Userhat, Draa Abul Nagaa, West Bank, Luxor
The Egyptian archaeological mission working in Draa Abul Nagaa necropolis on
Luxor’s west bank unearthed the funerary collection of a New Kingdom tomb of
Userhat, the city jury.
Tomb Description: It represents a typical example of a
nobleman tomb. It is a T-shaped tomb consists of an open court leading into a
rectangular hall, a corridor and an inner chamber.
After removing almost 450 metres of debris out of the
open court, appeared the entrance of the tomb as well as two other entrances
leading to two joint tombs.
Excavation works are at its full swings to reveal the
secrets of these two tombs.
Inside the rectangular hall, a well-preserved wooden
coffin, decorated with coloured scenes, was unearthed and a nine metres deep
shaft was uncovered. Inside the shaft, the mission has located two rooms; one
on the eastern side where a collection of ushabti figurines, wooden masks and a
handle of a sarcophagus lid was unearthed. The second one is located on the western
side but did not completely excavated yet.
The corridor of the tomb leads into an inner chamber
where a cachette of sarcophagi is found. It houses a collection of sarcophagi
from the 21st Dynasty with mummies wrapped in linen.
A collection of ushabti figurines carved in faience,
terracotta and wood was also unearthed as well as another collection of clay
pots of different shapes and sizes.
Team Work: Dr. MostafaWaziri, Head of Archaeological
mission Mohamed Khalil Head of the Antiquities Inspectors Mohamed Daabish and
Ahmed Al-Tayeb, Antiquities Inspectors Ahmed Baghdady and Ramadan Salem,
Restorers "

Another report of travelling under the new laptop regulations from Egypt


I travelled from Luxor to Heathrow with Egyptair on Monday 10th April 2017. As a result of the latest advice issued regarding tablets/laptops, I put my Tablet (which exceeded the measurements for being allowed into the Aircraft Cabin), into my Hold Luggage which I protected, as much as I could, with bubble wrap/clothing.
The procedure inside the airport this time, as against previous visits, last November and before that date, involved the checks on Passports and Tickets was made at the entrance door of the airport and not, inside, just before the first Scanning machine. For the 10am flight I arrived early, so I had no wait but, by 8am, there was a long queue outside the door waiting for the Passport/Ticket checks. By the this the sun was well up and some were waiting in that warm sunshine.
My hold luggage was scanned and I indicated to the operator that I had a Tablet inside and he indicated that there was no problem and I then proceeded to Check-in. I later observed the first scanner from within the upstairs departures section and some passengers were taken to the right and their baggage was opened and checked.
Now this seems all quite reasonable, but when I arrived in an airport hotel in Heathrow, both of my hold suitcase ( one of which had no tablet or laptop inside ) were sealed through the lock-eyes with small almost clear coloured cable ties. Of course, any  scissors or other sharp tool I had to cut the cable-ties, was inside my suitcases. Luckily, I found a room cleaner who let me borrow her scissors from her own handbag. I am still trying for think of what I could pack in Hand Luggage which would be allowable in Hand Luggage for cutting these cable-ties on future visits.... I did think of toe nail clippers but the ones I have also have a sharp pointed nail file attached...So, no good
As I was out in Luxor when the new regulations regarding Tablets and Laptops came into force I would suggest that perhaps consideration should be given that your electronic equipment is not insured whilst in the aircraft hold and perhaps have a look at the operating temperature range because your tablet/laptop will be subjected to the hot Luxor weather and then a long flight in an unheated luggage hold with temperatures as low as -60 deg. . I have looked online and there are tablet/laptop cases available which are padded, hard cased, and waterproof ~ This might well be the way to go if you really need to have your larger 'electronics' with you. If these regulations are here to stay, then I'm sure that manufactures will soon be offering an array of suitable products to give additional protection for your tablets and laptops.#

I hope the above helps others.
Posted by Jane Akshar at 13:20 No comments: 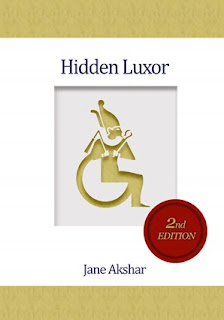 Dr. Sherif Abd El Monem has sent my information to Shenouda Rizkalla who is a PhD candidate in Egyptology, Helwan University.. Very interested in Disabled people, done a site management field school under the supervision of Dr. Sara Perry from York University and Workshop under title " How to deal with disabled people in the Museums" AND published a paper in the international conference of Minia University " Challenging Disability" under title " Visions for the Development of Interpretation and Facilities for the disabled People in Egyptian Archaeological Sites and Museums" in 26- 27 March 2017.

Shenouda says "I saw your project " Hidden Luxor" it is amazing, especially the Logo  as it is a social object and hot interpretation. I read the paper and articles which you sent to Dr. Shreif . When Dr. Shreif mentioned your name I said to him I know her.

I want to contact you and do proposal about Disability  then introduce this project to the MOA and also to deal with the co- operation work with us in this field."

Isnt that fabulous, my little campaign is having an effect!
Posted by Jane Akshar at 18:51 No comments:

Flying under the new regulations from CAIRO

Many thanks to Richard Fero for sharing his experience

Jane here is a Cairo Airport update from when I passed through:

Air France is allowing electronics on board in the cabin, although one of the ticket agents said you could not carry such items and wanted to check them. The Egyptian Police are allowing you to carry the items through the new departure 2 terminal check point to the gate (Air France) as of 3-31-17 when I passed through.

Beware Air France is taking some travelers carry-on bags claiming they are too heavy for the cabin and requiring them to be checked. Word of advice if you check a carry on there is a kiosk a few feet away that can wrap the bag with clear plastic for 20 LE. I had to check my carry-on bag. This was the same carry on I brought with me from Atlanta, Paris to Cairo on Delta and Air France, but not allowed to carry back the same way. Inside the carry-on that had to be checked were Professional Nikon camera lenses 7,500 USD with other equipment total of over 9,000 USD. The Air France ticket agent only allowed me to carry my Nikon Pro 35mm digital camera 6,500 USD on the plane after a 20 minute “discussion” with him and his Supervisor. I was allowed to carry in the cabin my backpack with an Apple Mac Book Pro 13 inch computer 2,500 USD. Carry-on bag arrived in Atlanta unopened with all equipment inside.

I recommend not bringing anything if you can until this situation changes. Note: Air France did not recognize the reciprocal agreement it has with Delta airlines concerning the weight of carry-on bags. Delta does not weigh your carry on and is really only concerned as long as it can fit in the overhead. Air France on the other hand does not recognize this and if you are 16 ounces over they will check the bag, KLM does honor the agreement.
Posted by Jane Akshar at 14:12 No comments:

Warfare and Weapons in Ancient Egypt


Starting on April 17th, Egyptologists from the University of Manchester have created an entirely new and revised version of the popular short course "Warfare and Weapons in Ancient Egypt" on the Canvas platform. Composed of entirely new material and taught by Dr Nicky Nielsen, the course investigates how Pharaoh's soldiers fought, won and lost in the great game of politics across the Ancient World. This five-week course is completely free and enrolment has already begun here: https://www.canvas.net/browse/uofmanchester/courses/warfare-weapons-ancient-egypt
Posted by Jane Akshar at 13:12 4 comments: