My report from the press conference

The press conference opened with a short film showing the
radar scanning of the room with sponsorship of the National Geographic. Dr
Mandouh stressed the speed that things had happened from the announcement on
Oct 1st that an investigation would happen. The physical inspection
and presentation to Egyptian officials by Prof Reeves till today the results of
the raw data scan.

They tested the equipment inside KV5 (the sons of Ramses II)
and then in the known parts of the Tutankhamen tomb. The valley comprises of
different kind of rocks and condition of those rocks so it was important to get
a benchmark before the investigation begun. As KV5 is not open to the public
the test could be proved and the subsequent trial in Tutankhamen where the
antechamber/annex were tested. This proved the accuracy of the equipment.

Then the walls of the burial chamber of Tutankhamen were
test and  both the north and west walls showed positive results. The west results showed a void but the primary results from the north wall were so conclusive that conclusions could be drawn from the
primary raw date. More data analysis is need and that will take approximately
one month but they are 90% sure that there is a chamber behind the north wall

This investigation started with the scan by Factum Arte. It cannot
be stressed to highly how much we owe to their work and express our thanks for puting
the work online. This enable Nicholas Reeves to study these high resolution
scans and come to the conclusion that there was evidence of a doorway. The west
wall is X in the investigation and the north Y. The west is where a Tutankhamen
era storage room is proposed and the north where Dr Reeves proposes a tomb
within a tomb. The raw data from the west is a little inconclusive but there is
definite void however the north wall definitely shows evidence of a huge void
with straight walls. Other evidence shows chisel marks in the ceiling and even
the possible evidence of a service door.

A slide was shown and it was stated that this just shows raw
data but def. confirms the huge void on the north side. This void is so large
and even the raw data makes it immediately obvious. Dr Hirokatsu Watanabe said
with his 40 years’ experience he did not have to wait for the analysis to
confirm with certainty there is something there.

Dr Mamdouh said there were more secrets and he believed that
possibilities are Kiya or Meriaton, Dr Reeves believes it could be
Smenkhare/Nefertit. He also believes the valley has more tombs either royal or
more likely commoners.
Previous techniques of excavation have been to go to the
cliff edge and go down and then you hit bedrock but Carters excavation (although
he didn’t realise it) reveals the valley is stepped so things could have been
missed.

Dr Reeves stated strongly that work had to proceed slowly
and carefully. Archaeology is not a race and by its very nature it is
destructive so you only get one go. Currently even the air inside this chamber
had pollen, dust etc. to reveal so you can’t drill a hole and stick in a fibre
optic as that will contaminate it. It has to be hermetically sealed and analysed.

Salah Elmasekh, Egyptian archaeologist, made the point that this was a unique discovery as it is the very first discovered using high technology techniques and equipment and makes a case for ALL tombs to be investigated using this technique

Radar test underway before search for Nefertiti in tomb of Tutankhamun - Ancient Egypt - Heritage - Ahram Online: The Ministry of Antiquities is carrying out a trial-run on the walls of KV5 to test the accuracy of the Japanese radar before using it inside Tutankhamun's tomb 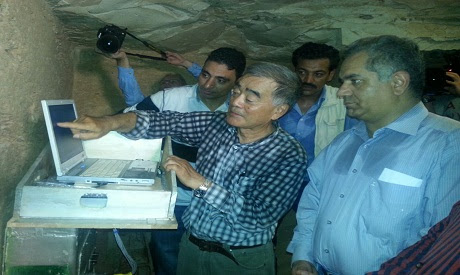 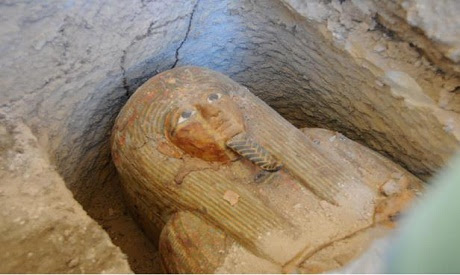 If you want to leave a message for Otto's Schaden's family

I have just had an email from Earl Ertman informing me of the sad death of Otto Schaden.  Otto was a huge figure in Egyptology excavating the tomb of Ay (about which he wrote his dissertation) and KV10, Amenmeses. It was during this excavation while searching for foundation deposits that might give more clues about the origins of Amenmeses that the tomb of KV63 was found. The first discovery in the valley for decades. It caused huge excitement. I was lucky enough to be
involved on the side lines providing a couple of photos and writing up Ottos lecture. I had a great relationship with the team and with Otto. He very kindly sent me updates and helped me with my studies. He was a kindly, teddy bear of a man, a great Egyptologist and scholar. 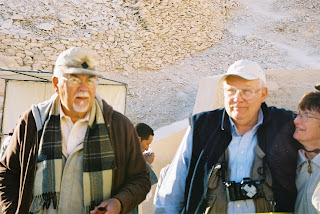 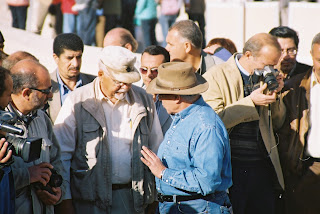 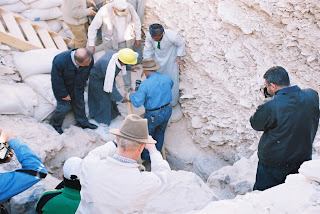 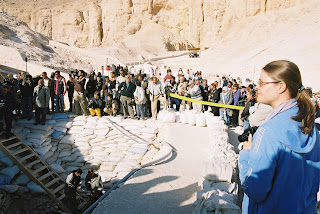 Search for Nefertiti in Tutankhamun's tomb to start Thursday - Ancient Egypt - Heritage - Ahram Online: Exploration work will start Thursday to test a theory that Egyptian Queen Nefertiti is buried behind a wall in the tomb of King Tutankhamun in Luxor's Valley of the Kings, according to Egypt's Ministry of Antiquities.
Posted by Jane Akshar at 17:38 No comments:


Osirisnet presents to
you today an anonymous Theban Tomb, TT 175. It dates back to the middle of the
18th Dynasty (probably Thutmosis IV).This tiny Theban Tomb has the distinction
of being decorated, but not inscribed. Painters have packed as many scenes as
possible which were considered as indispensable by the owner. The owner
probably held functions connected with the manufacture, handling, and storage
... of products from the land.

During a visit to the Arab poetry house, scheduled to be opened on Sunday 15/11/2015 in Luxor, the minister thanked Ruler of Sharjah Sultan Al Qassimi for establishing the house.
Posted by Jane Akshar at 13:31 No comments:


Qurnet Murrai: comprises of the nobles tombs of Tomb TT 40 of " Imn hotep – Hwy" Viceroy of King Tutankhamun in Kush and Governor of the South Lands, Tomb TT 277 of " Imnement" Divine Father of Imn hotep III palace, and Tomb TT 278 of " Amunemheb" Herdsman of Amun Re in the New Kingdom. The ticket is the one for Deir el Medina the workers village making that ticket VERY good value. 5 tombs, village and temple
Qurnet Murrai is located almost directly opposite the ticket office. TT277 and TT278 are at the bottom of the hill and TT40 is near the top. It is a steepish climb but the effort is worth it.
There is a full Facebook photo album here https://www.facebook.com/media/set/?set=a.10153564861006072.1073741857.528791071&type=1&l=63a3fc9a1b and the other people who went with me have their albums here. All these are public so even if you are not on Facebook you will be able to view them.
https://www.facebook.com/june.richland/posts/1070422752991476
https://www.facebook.com/june.richland/posts/1070421802991571
https://www.facebook.com/june.richland/posts/1070427072991044
Once you get to the tomb the entrance is direct into the hillside, it is a typical T shaped tomb with only the transverse corridor decorated. There is a statue group at the end.
There are some fantastic drawings on the web and I encourage you to search.

The decoration is very connected with Huy’s role as the Viceroy of Kush.  So shows a lot of Nubian figures, tribute and boats. The cartouches of the king have been hammered out
SE wall Huy inspects products from Nubia
SS wall has a stele
SW wall has Huy returning from Nubia, Nubian tribute including twin beds with head rests and Tutankhamen receiving the offerings seated in a pavilion
NE wall shows the appointment of Huy in front of Tutankhamen seated in a pavilion
NN wall has a stele; there is a little vignette of the KA being presented to a BA bird
NW Shows Huy adoring Osiris and tribute from Syria in front of Tutankhamen
The celling is beautiful decorated with a geometric pattern

Ameneminet (or Amenemonet), a priest in the service of the god Ptah-Sokar, in the Temple of Millions of Years of king Amenhotep III. He is actually alive during the Ramaside period but because of his job he shows Amenhotep III
All the detail you could possible wish for about TT277 is  here http://www.osirisnet.net/tombes/nobles/ameneminet277/e_ameneminet277_01.htm Highlights for me were Ahmose Nefertari and Amenhotep I being adored, the variety of fish in the Nile, Amenhotep III and Tiye. There is a steep step to get down and the guardians will give you a hand up and down

TT278 tomb of Amenemheb (Herdsman of Amun-Ra) There is a plan here but sadly the site is restricted.

http://quod.lib.umich.edu/u/umdvrc1ic/x-d11-11453/d11-11453
Highlights were Hathor emerging from the mountain and as the lady of the sycamore. Also a nice Osiris in his shrine
Posted by Jane Akshar at 18:56 No comments:

Not Luxor but I know you will be interested.

Thermal scans of Egypt's Great Pyramid reveal anomalies - Ancient Egypt - Heritage - Ahram Online: The scans revealed anomalies including empty areas in the pyramids, which could be internal air currents or different building materials
Posted by Jane Akshar at 23:53 No comments:

One possibility is that the difference in temperature is caused by a hidden open area behind the wall.
Posted by Jane Akshar at 02:09 No comments:

Tutankhamen's tomb to be photographed with radar on thursday

Tutankhamen's tomb to be photographed with radar on thursday 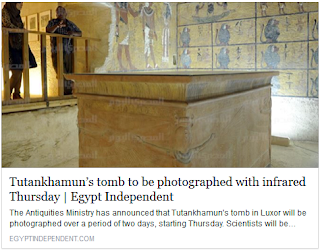 Luxor's special day, the day the tomb steps of Tutankhamen were found and our national day.

Tutankhamun's tomb opens after restoration - Ancient Egypt - Heritage - Ahram Online: The tomb of the boy king Tutankhamun at the Valley of the Kings on Luxor's west bank has been opened for the upcoming celebration of the city's national day on 4 November, which coincides with the discovery of Tutankhamun's tomb in 1922.
Posted by Jane Akshar at 13:32 No comments:

Luxor's special day, the day the tomb steps of Tutankhamen were found and our national day.

Tutankhamun's tomb opens after restoration - Ancient Egypt - Heritage - Ahram Online: The tomb of the boy king Tutankhamun at the Valley of the Kings on Luxor's west bank has been opened for the upcoming celebration of the city's national day on 4 November, which coincides with the discovery of Tutankhamun's tomb in 1922.
Posted by Jane Akshar at 13:32 No comments: