Excavations at the tomb of Ay 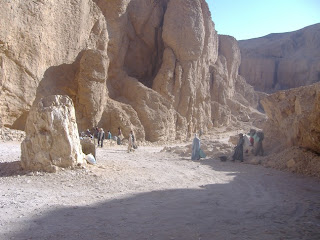 Visiting my favourite tomb the other day and expecting to find it deserted and quiet I was surprised to find dozens of people excavating. I managed to chat with the geophysics chappy called Dash. He said they were searching for the Amarna tombs which made a lot of sense to me as the Western Valley only has two known tombs Amenhotep III and Ay (possible originally built for Tutankamun). He said lots of interesting things.

1) the Eastern Valley deceives you, cut surfaces are identified but these led nowhere, tantalising and mysterious why are there

2) there are 4 bore holes at the tomb of Ay, nobody knows why they are there. Could possible by some kind of marker. Either old or new Belzoni or anything as nobody kept a record

He had just started work but there was also lots of excavations goign on as well.
Posted by Jane Akshar at 12:33

Thanks, very interesting post, VOC must be crawling with archaeologists.
Dr Hawass has talked about finding Nefertiti, it’s turning into the Amana Royal Graves Hunt down there.

Is it possible for you to post a couple of weekly photos showing the progress in the East Valley?
Dennis