I had an exhausting morning with Mansour Boraik, would you believe we had a meeting on the hottest day this year. He got Salah to show me the new stuff at Karnak and then we drove the whole length of Sphinx avenue stopping at the various bits so he could show me what they had found and how they intended to site manage the Sphinx Avenue, I will try and write that up tomorrow. 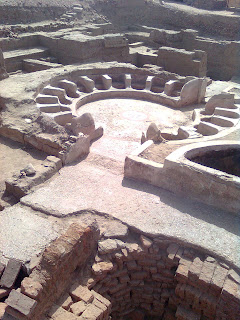 Back to Karnak, they are excavating the area to the right of the first pylon. There used to be houses and bazaars there. Further excavations have revealed the heating room. Just at the bottom of the picture 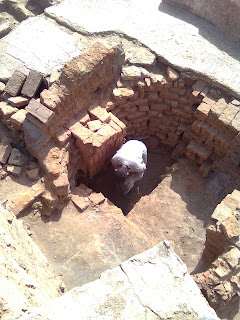 Here is a better shot and you can see how much lower it is than the rest of the bath. 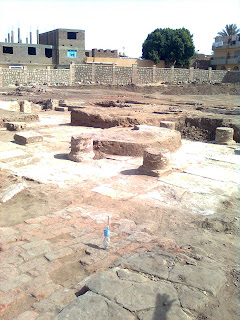 Would you believe they have found another bath, this time Roman. This is believed to be the entrance. 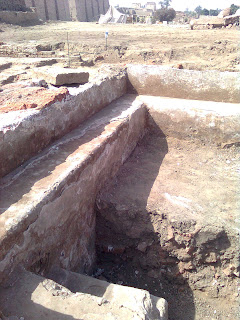 Here is the actual bath and you can see the short flight of steps leading down to it. 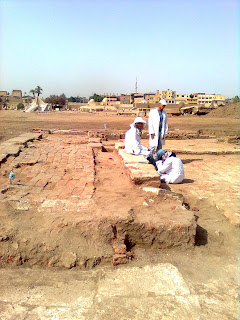 Having reported on the field training schools it was nice to see all the young inspectors at work. 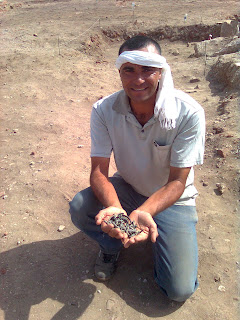 Salah El Masekh, Mr Mansour’s assistant took me round and showed me some of the finds. 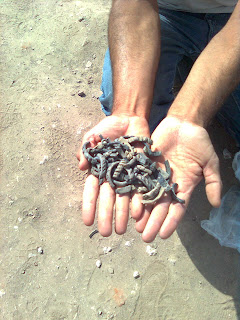 He had found a drainage hole and at the bottom were loads of amulets, broken jewellery etc. These bracelets were of glass. 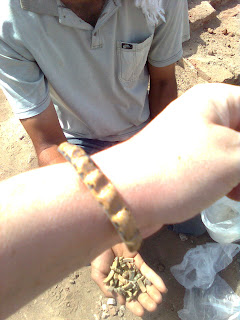 They fit on the wrist nicely. 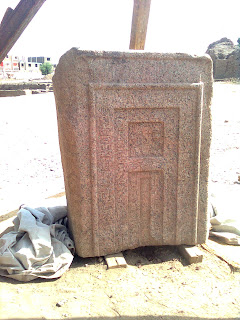 But the big find is a false door of UserAmun, someone who we have few relics of. Two funerary cones was the sum total until this was found. He has two tombs TT61 which Salah said was small and unfinished and probably built in the early years of Hatshepsut. TT131 is much richer, bigger with good reliefs but with no hole for the false door, which is of good quality, red granite. Sorry you can't read the glyphs the sun was in the wrong position but if I manage to get better shots I will publish them.

Mr Mansour gave me a draft of his paper which he expects to publish soon. He thinks it might have come from TT61, Salah speculated it might have stood alone in Karnak as it mentions Ipet Sut, the name of the temple. It has an Amarna erasure so must have been exposed. His father Ahmose was a vizier and although he had 5 sons and 5 daughters they were priests and in the army. However his nephew Rekhmire did become a vizier.

Thanks to Salah and Mansour for a great visit.

PS it is scary to think how much more there is to find
Posted by Jane Akshar at 21:20

This is fascinating. I visited Luxor in 1999 and can visualise more or less the site, so it is wonderful to read of recent discoveries.

Dear Jane, as I told you before I've been in Egypt 2008, and it's amazing the work they've been doing in the last 2 years in Karnak Temple. I read in last Ancient Egypt Magazine, the work in the Avenue of Sphinxes at Luxor, that in the future will be linked with Karnak Temple, I'm waiting to see the results to come back to Egypt!!! I love the work they are doing, and the respect that they have to that sacred place (IPET ISUT). I'm sure Karnak Temple still have many secrets to reveal.

Hi Jane
Just come back from a Nile cruise Nov 2011 and was delighted to be shown around this very site by Salah and was allowed to do some digging of my own! I was so excited to unearth a Ptolomaic pot c.300 BC and all in one piece - but there is stuff littering the place just waiting to be dug up!
I too am delighted they are continuing to excavate the Avenue of Sphinxes but there is still much to do.