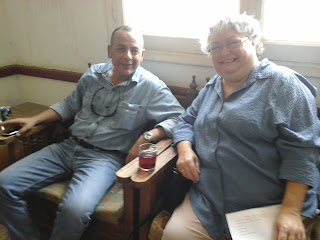 I just met with Dr Moustafa  Wazery who is head of the mission responsible for the new work at KV2 Ramases IV, in the valley of kings. It was so good to see him again as the last time I saw him was in 2010.  The most important thing to know about his work is that it will not affect access to the valley. It is taking place high up on the valley.

The purpose is to remove the debris from old missions and restore the valley to its appearance in ancient times.  In the past whenever an excavation took place the debris was just moved to the nearest empty place. This has affected the topography of the valley. By removing this fill and restoring the ancient look it will protect the valley from flash flooding as the ancient Egyptians had allowed for this.

We also talked about Nick Reeves paper on Tutankhamun. He had heard about this but has not yet read the paper (I promised him a copy) he agreed it needed through investigation and analysis as any physical investigation would be destructive to the Tutankhamun burial chamber. Even a tiny fiber optic cable would be destructive. He promised if he heard what the decision was he would let me know.

The last thing we discussed was the letter I sent to to Dr Mostaf Ameen back in February. It is good to see some progress on this. 1) Mut and Deir el Shelwit are both being charged in Egyptian pounds 2) the dewatering projects are working well. The various directors were in the office and they confirmed this. Dr Moustafa promised to follow up with the other points I raised, fingers crossed we might get our lectures back.