This year on my course we are studying a period of history I have never been very keen on starting with late New Kingdom. I am changing my mind. My first essay is on the Sea Peoples and Libyans and their interaction with Egypt. Now Medinet Habu is the best place to get information, OK it is Egypt's version, so more propaganda than history but compared to the rest of the world at the time it is the best documentation we have. So I decided to get some photos 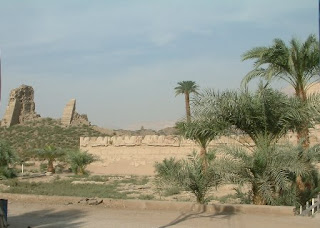 First of all compare the site to other mortuary temples, note the defensive walls. So thick in places, houses could be built in the thickness in later times. This gives a good indication of the times. Temples needed protection. there are bandits roaming the desert. 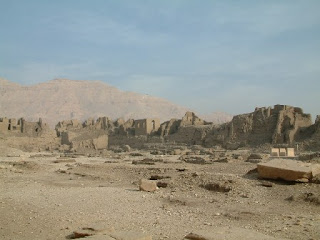 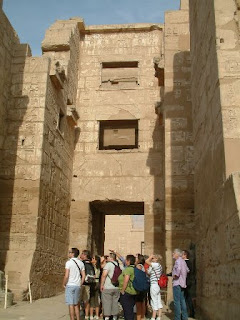 This is the entrance, a huge defensive tower. interestingly enough this also appears to have been the site of pharoahs pleasure rooms. A wall decoration shows the king with a young girl which would indicate the upper rooms at least were for fun as well. This is also the period of the Harem Conspiracy when a secondary wife tried to kill the king and replace him with her young son. They were found out and a trial took place. This is another indication of the times, the king was no longer the revered god king, people were prepared to plot against him. 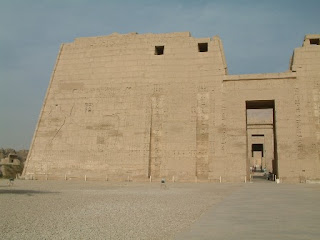 The first pylon tells us what all this is about the king smiting his enemies in front of the gods. The choice of Gods is interesting. Amun of course after all we are in Thebes but on the other side Re Harakty. Was the king try to get over a point to the Amun priesthood. 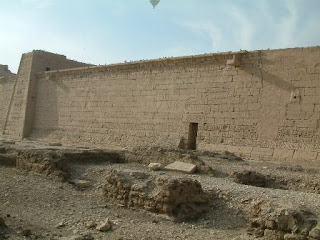 The bit I was interested in was the northern wall on the outside. Here Ramses III documents his land and sea battles. These took place in years 5, 8 and 11 and although he won this was a defensive war and shows that Egypt is not the great empire it used to be taking the offensive. They are now on the back foot. 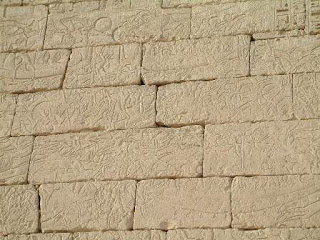 This is the unique portrayal of a sea battle, you can see the various different styles of boat, the enemy's boats have two decorated ends but the Egyptian boats only have a decorated prow. 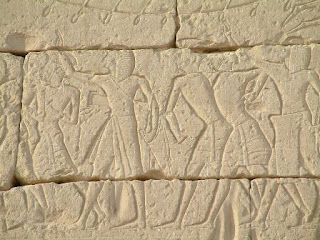 Underneat you can see lines of prisoners and here you have two very different men. one is a punk rocker, my joke. But his hair or headdress is very distinctive. 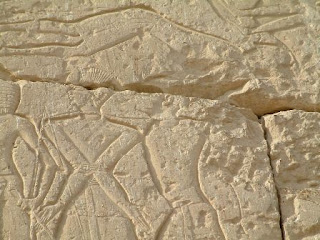 Looking at this in more detail our punk rocker has protection at the back of neck. The other man has a cap like helmet with a horn, the horn is just visible above the crack. 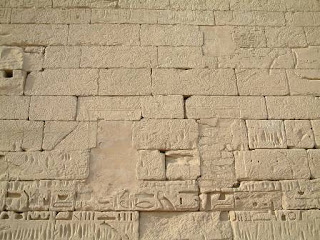 This is the land battle, a more normal scene but in between the two later Coptic shrines is an interesting detail. 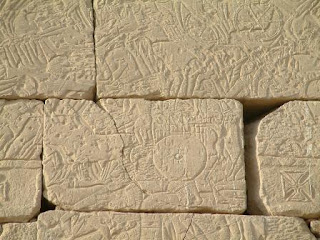 Center picture you can see a large wheel of an ox cart, in front are 4 oxen, there appears to be a wicker or woven box with women in it and one of the women is pulling a young child back into the wagon. Now this is very interesting because not the usual thing you would expect to see in a battle. The Kadash scenes have nothing like this as they are a pitched battle between two armies. This appears to be a wagon train, These are economic migrants bring their women, children and cattle with them. 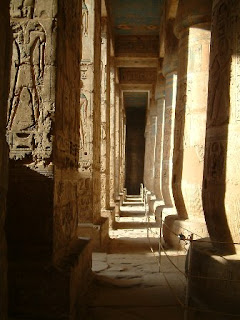 A nice atmospheric shot taken from the outside looking into the pillared transverse hall in front of the hyperstyle hall. 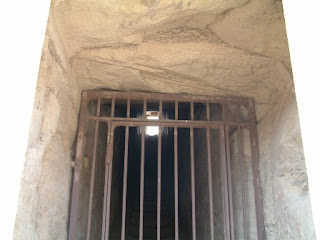 This shot is also taken from the outside, the side wall of the first pylon and the stpes that lead to the top where there would have been various rituals. 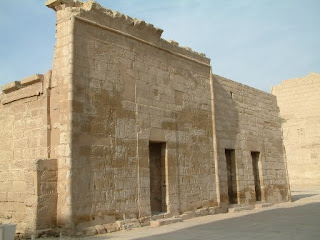 The much later chapels of the divine adotrix. 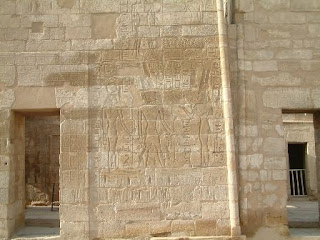 The morning light shows the carvings so much better than later in the day.
Posted by Jane Akshar at 10:17

Your blog is very interesting and contents are really exceptional. I enjoyed reading your postings.

Thanks for your time.
Sincerely,
Stephen f. Williams