Egypt Then and Now

I think one of the things I love about living in Egypt is the timelessness of the life. On my course we recently had to research the diet of the Ancient Egyptian and I found myself looking at what they eat now against what they ate then.

The main carbohydrate in ancient Egypt was bread, in Luxor bread is not called by the Arabic word for bread khoubz but ayish which means life. I am convinced this is a throwback to pharaonic times. Every meal bread is served. It is made in the home and rises in the sun which gives it the name sun bread. Other items you see in tomb painting are part of the normal diet here cucumber, dates, pomegranates, figs, grapes, ducks, chickens, quails, enormous spring onions (see the tomb of Roy for a great example), garlic. The first time I saw a cow being butchered it was tied up in exactly the same way at the tomb and temple depictions. 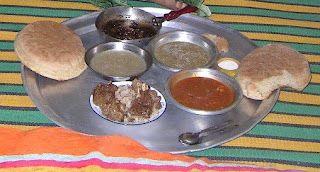 So nothing has changed but not just in food.

On my roof we have some pots in stands that have plants in them, I was recently in the British Museum and looking at the paintings of Nebamun and exactly the same pots and stands were in the paintings. You often see large pots at the sides of the road which are communal and the design is identical to the ancient pots which were no doubt used in exactly the same way 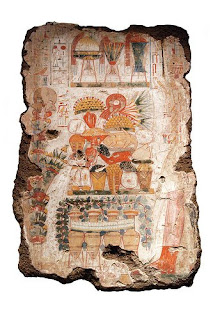 When you are going along you will often see mud brick structures with rush/grass tops. It looks like the plant is growing out of the top of the wall. It reminds you so strongly of the pylon with the curved cornice. Small shelters made in the fields replicate those shown in tombs on boats going to Abydos.

Mud brick is still made exactly like it is depicted in the tomb of Rekhmire, it is a fantastic material for coping with the temperature in Egypt, cool in summer warm in winter, completely durable in the climate here.

Outside my flat there is a large field and when they plant wheat and crop it afterwards you see women gleaning the fallen grains. It is still scythed by hand and looks exactly like the picture in the tomb of Sennedjem at Deir el Medina Animals are moved on the land to clear it and fertilise it.

Barry Kemp says that you cannot study Ancient Egypt without studying modern Egypt and I so agree. When I came here first in 1979 you could still see the shaduf working, this is a pole with a container one end and a weight the other, perfectly balanced it enables water to be scooped out of a canal into an irrigation ditch. For 5,000 years this was the principle method of moving water to the fields. It is fascinating to see so much of daily life still going on.

If you come to Egypt see how many things you can see that have come from pharaonic times
Posted by Jane Akshar at 14:55

If you find that interesting you probably would enjoy reading this book: