Well I wasn't there due to my surgery but Michael Campbell Smith of "Michael on the roof" fame was and took these notes, big thank you. He even took some photos seems like I am redundant.

Funerary Cones
The first of the SCA series of winter lectures was given by Dr Kento Zenihiro of Waseda University, Tokyo in the Mummification Museum Luxor on Saturday 5th December.
Funerary cones, baked clay tapered cones, bearing the titles of the owner of the tomb are found at many sites in Egypt, but the vast majority come from Thebes. The cones, taken from one mould, were inserted in the courtyard of the tomb, above the entrance door to the inner hall.

Cones can come in many shapes. 646 different types have been identified so far, with 21 discovered by Dr Zenihiro in recent years. Cones appear to have a white face for a male, and a red finish for a female. The taper can be long, or short. Different manufacturing methods were used. They appear to come mainly from the 17th and 18th Dynasties, with a revival in the practice under Seshonkh.

Many theories have been advanced for the purpose of these cones. To indicate the sealing of the tomb, as a passport, as an ornament, or perhaps symbolically as meat, bread, the position of roof beams, or as the sun. (Clearly, no-one has the first idea. ed.)

In support of his contention that the inscriptions on funerary cones allowed a methodology which would indicate the status of the owner in comparison to his contemporaries, Dr Zenihiro produced a number of arguments.

Research history on hierarchy in the New Kingdom has concentrated on literary and archaeological sources. Dr Zenihiro believes that funerary cone inscriptions offer a third and more reliable method. Because cones could only accommodate a number of titles, the most important and desirable were chosen, unlike the walls of the tombs, where, with more space, the artist could give full rein to the deceased’s titular. This presents a comparison, and, allows the owners of the cones to be placed more accurately in the hierarchy of the period. The limitations of previous methods meant that only titles from the same genre were compared, only chapels were analysed, the volume of grave goods found did not indicate rank, and sources were contaminated in respect of their dates.

Dr Zenihiro’s research allows us to determine social rank by utilising objects on which selected titles have been written. They were positioned to be read and to impress passers by, a précis of the most important part of the tomb owner’s life.

The lecture was bought to a conclusion by Ibrahim Soliman of the SCA, who voiced the appreciation of the audience for a most interesting opening to the winter lecture programme. 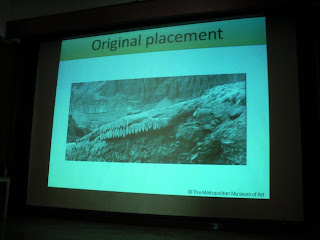 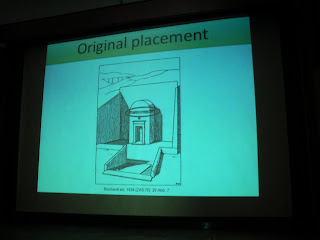 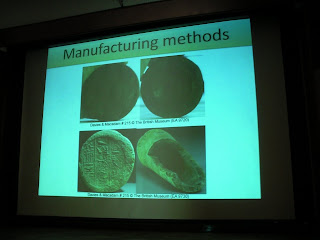 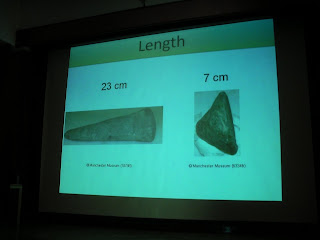 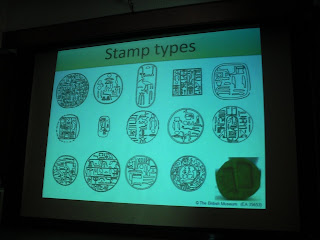 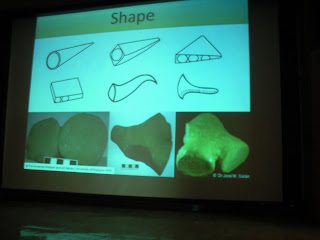 Michael did a very nice job but I'm sure he won't want to try to replace you. You're the only one who can understand some of the foreign speakers!!
Best,
Sharon
P.S. Please take it easy, Jane!!

very well done michael, the photos are great, jane must be so proud of you, love mary.xx

No one will ever be able to replace you, Jane! ;] But Michael did a very nice job as "pinch hitter".