This temple is my personal favourite because Seti is such a modest guy, he is always shown kneeling, bowing or offering. There are no huge colossus of him and the part dedicated to his mortuary cult is almost tucked away round the back. So unlike his son Ramses II. Someone was asking about an old water colour in a museum in Ireland and I was looking up my photos and decided to give you a diary of my visits to the site. These entries are taken from my blog at the time and the relevant photos accompany them.

This is the plan of the temple

I first visited the site in 1986 and at that time it was partially restored and only the back part of the temple was accessible, everything else was buried with camels wandering free where the first pylon was! No tickets required. 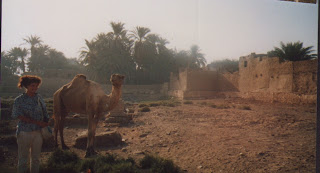 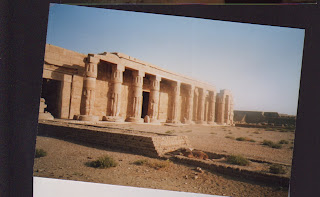 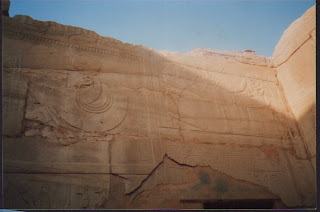 In 2004 I attended a lecture about the site which described the restoration work that went on.
http://luxor-news.blogspot.com/2010/09/old-mummification-museum-lecture-seti-i.html So I went hot footing it up and had a look round. 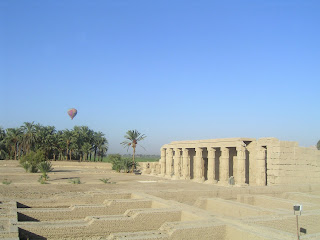 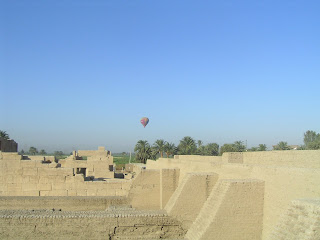 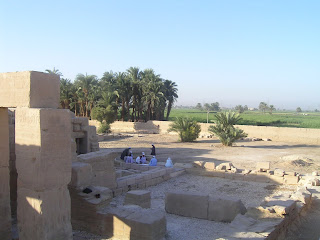 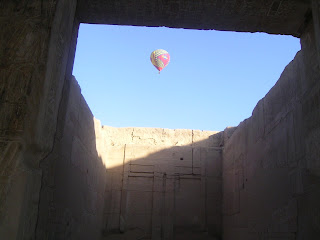 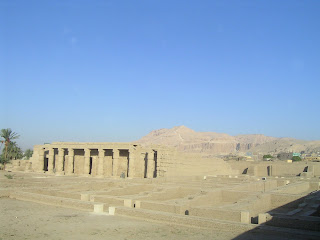 August 11th, 2005
Seti I temple at Gurna
It is with great sadness that I have to report the damage being done by the rising water table to this monument. It is about 3 months since I was there and it was hard to believe the state of the temple. Some parts have been dug round and there is a little moat round them where the channel has filled with water. There was one area where the sandstone blocks were reverting to the original sand. In the gateway of the first pylon the lower blocks are just falling to pieces and as you walk round the courtyard the salts crunch under your feet. I don’t know what the solution is but it nearly broke my heart to see the destruction. 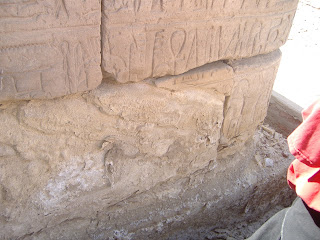 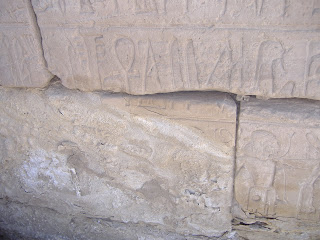 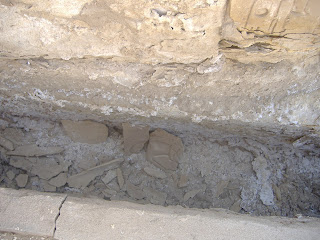 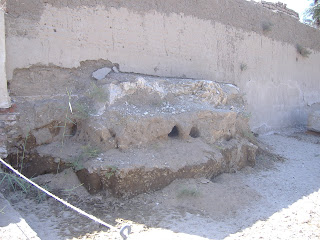 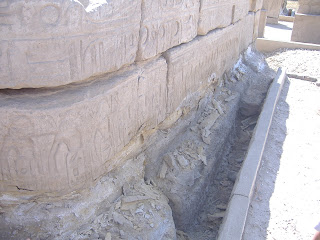 I am sorry there is no other word, the rising water damage has always been an issue there and has scared the living daylights out of me but look at this photo. The entire piece is about to fall of and disappear into the trench surrounding it. but it gets worse, the shameful neglect of this site is appalling. there is vegetation growing everywhere and damaging both restoration and Pharaonic stone. This is the picture of the temple palace, it looks more like a garden than a palace. This is the condition of the late Roman house. It is absolutely appalling that this fine temple is being left to rot like this. Yes I am angry, the Egyptian government is putting the prices of the monuments up by some 25% and they better spend some of that money quickly while there are still some monuments to spend it on. 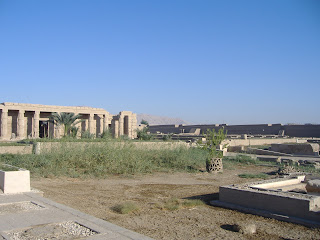 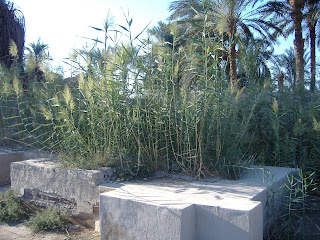 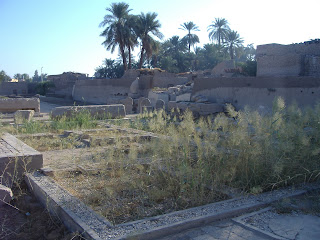 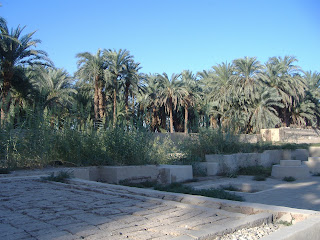 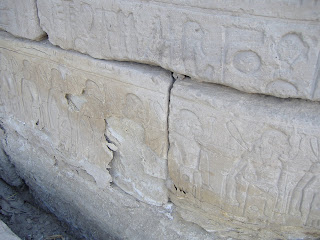 April 28th, 2007
Restoration at the temple of Seti I
Something appears to have resulted from the publicity I have been giving to the deterioration at the temple of Seti I at Gurna. This lovely temple has been suffering badly from the rising water table and I reported and photographed massive pieces of decoration falling of the pedestals located by the first pylon.
Today I went there and I was the happiest Egyptologist in Luxor as I walked in to see a team at work. Working under the direction of Rainer Stadelmann, Elena (sorry I didn’t get her surname) from Madrid University was directing workman to remove the pedestal blocks. She very kindly explained what was going on. They arrived there 10th April and are due to leave 10th May. The idea is to put all the endangered blocks away from the water table. First they are doing emergency stabilization work, then the blocks are being moved onto wooden rails to keep them out of contact with the ground. During the summer then will dry out and when the team returns in October they will do more long term restorations and eventual reassembly. Elena had recently been working at the Amenhotep III temple and her team of Egyptian workman also. As a result she told us they need little supervision and were totally familiar with the kind of work they had to do. Whilst we were there they were removing one block and she pointed out the totally saturate soil around the block. This is elena in front of one of the pedestal blocks, you can see how fragile it is, some of the blocks had lost decoration before she arrived (as I have reported) but where ever possible she has retrieved these fragments and hopes to piece them together. Some of the team are working on piece these pieces together and here is one member mixing material to the right colour. Some other team members are removing salts from the blocks. The team are removing the blocks from the second pedestal, I hope you can see how wet the earth is surrounding the block. 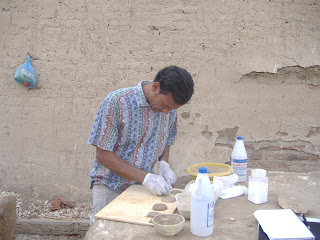 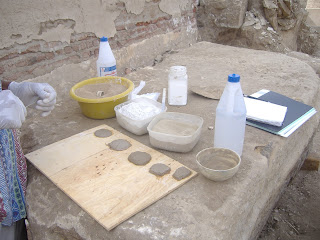 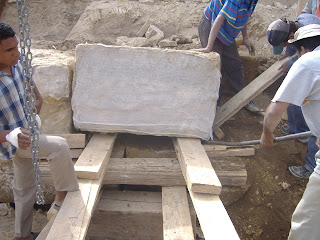 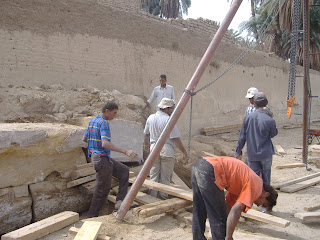 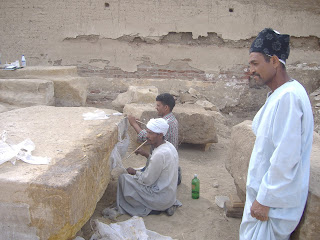 March 2011
A revisit with my Finish guest and the temple seems in a much better condition these days. The dewatering project should help further maintain the temple. 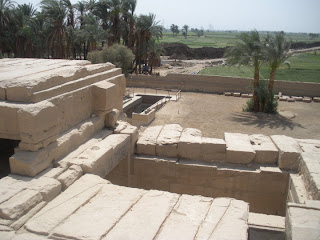 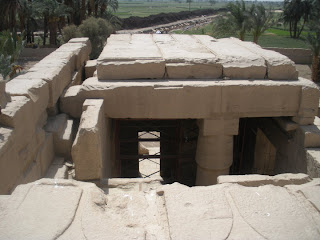 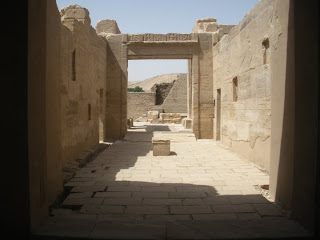 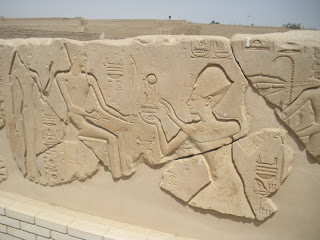 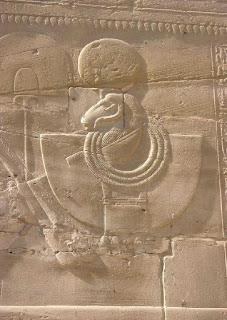 Email ThisBlogThis!Share to TwitterShare to FacebookShare to Pinterest
Labels: Seti I temple

I enjoyed this, thank you