Mexican Archaeologists will Return to Egypt

Interesting report and below I republished my lecture notes from this tomb. 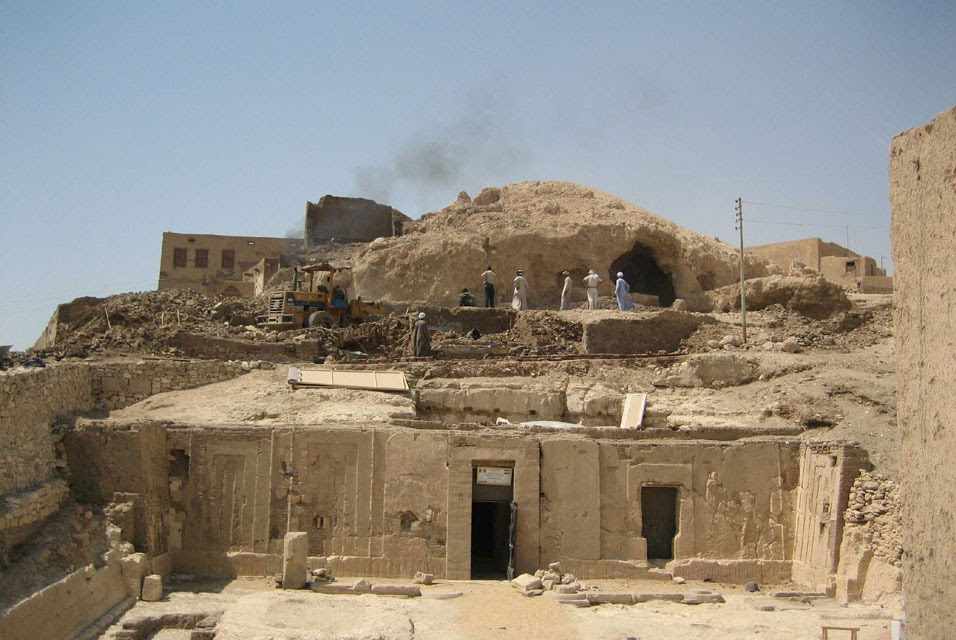 Mexican Archaeologists will Return to Egypt: "MEXICO CITY.- After 5 years of uninterrupted archaeological, restoration and iconographic interpretation work, the Mexican delegation in charge of conservation at the Theban Tomb 39, in Egypt, will begin the 6th field season in September 2010. The goal is to open the site to public in 2013.

Exploration at the Theban Tomb 39 continues to the exterior of it, since work at the interior is concluded, informed Dr. Angelina Macias Goytia, researcher at the National Institute of Anthropology and History (INAH).

The specialist mentioned that archaeological work to be conducted in September will focus on the retirement of 6 tons of debris accumulated from nearby hill runoffs. This material obstructs the line of sight of the 3,500 years old monument.

Archaeological labor adds up to work conducted by restorers from INAH National Coordination of Cultural Heritage Conservation, which focuses on the attention to mural painting, reliefs and cracks at funerary chambers.

At her participation at the Permanent Conferences of Archaeology organized by INAH, the head of the Mexican archaeological project at Egypt mentioned that this would be “the first Egyptian tomb salvaged and consolidated by Mexicans to be open to public”.

“The place is exceptionally beautiful due to the amount of hieroglyphs found on the walls, which can be deciphered, as well as the good conservation state of the murals”.

The so-called TT39 is a tomb/funerary temple that corresponds to the 18th dynasty, dedicated to the eternal rest of Pui Em Ra, second priest of Amon during the kingdom of queen at-Shep-Sut. The sarcophaguses of the priest and some of his relatives must have been deposited here, but the tomb has been looted several times.

The funerary precinct has a hallway and 3 chambers, each of them with different form, size and iconography, depending on the use given to them.

The northern chamber has mural paintings that represent the procession to bury Pui Em Ra, which are fully restored; the second was dedicated to his family and has a niche to place offerings, and the third one was a temple that has at the entrance 2 stelae with biographical hieroglyphs.

“As rubble is meticulously retired to detect the presence of archaeological material, the northern wall of the tomb will be checked to confirm how long is it, because we found cuts that could be the entrance to other interior spaces; there is a rectangular element that could be a room, but we need to verify it”, explained archaeologist Macias.

Archaeological work performed at Theban Tomb 39 is basically rehabilitation and maintenance of the funerary complex and research has been conducted to verify its extension and locate archaeological material.

Between debris and explored wells were recovered ceramic fragments, lithic tools, dry herb and flower bouquets that might have been part of offerings, and mummified human rests which chronological and cultural affiliation has not been determined.

Macias declared that the tomb still requires structural conservation work because there are fractures on the rocks of the hill to which the mausoleum is fixed. Mexican architects from University of Valle de Mexico, specialized on ancient monument restoration, will conduct this work.

“The authorization of the Egyptian Supreme Council for Antiques to work in an ancient tomb is an acknowledgement to the high level of Mexican archaeology and restoration, as well as to the INAH schools of Restoration, Conservation and Museography (ENCRyM) and National of Anthropology and History (ENAH)”, she concluded.

Dr Gabirela is from the Mexico mission and brought so much excitement and enthusiasm to the lecture. Puimra was a second prophet of Amun and his tomb is located in the Assasif area. Theirs is the first mission from Mexico in Egypt and she felt there was a lot of similarity in cultures.

The team started by using Goggle Earth to view the area of the Assasif and they also had a 1923 publication to compare with. They are using the very latest technology in their work,

Puimra had a lot of titles Inspector of the Cattle of Amun, Inspector of the Fields of Amun, One who the king has confidence in. Howard Carter found some statues of his and from these we know he was involved in the construction of Deir el Bahri and also served under Thothmosis III. He shows an obelisk with cartouches. Puimra had two wives; his principle wife was Senseneb a daughter of the 1st prophet of Amun and divine Adorotrix. His son Smenkephrera was also another import priest of Amun.

Dr Gabirela showed a slide of the tomb with the Gurna houses above it and commented that she was glad these houses had now gone as they had lost objects to tomb robbers while they were there.

There was a 17 sqm courtyard in front of the tomb and they are still excavating looking for the edges of this courtyard. There are 3 walls, the original one, one from 1920’s and lastly their own wall. There was graffiti from Norman Davies 1920.

There were 18 shafts in the area and a big 26th dynasty sarcophagus. The outside of the tomb had a complex exterior of a false door, Steele, entrance, Steele, false door with palace façade niches. Subsequent reuse of the tomb had changed these and one was cut out. The carving is of high quality into limestone. In front of the façade there was a 4 column porch in sandstone with relief’s coloured in yellow.

Inside there was a pillared hall with 3 chapels. There is good colour on the reliefs. Relief’s are usually plaster on limestone but in this tomb the painting is direct on to the limestone which is poor quality with a lot of cracks. There is evidence of different artists at work. The depiction of foreign people is the most popular relief from this tomb; it also shows gold being counted. The three chapels are the 1south pr-wr, 2 centre sh-ntr and 3 north pr-nsr/pw.

Northern Chapel
They found pieces of the door jamb. Scenes show a funerary procession, travel to Abydos, lots of offerings and a barrel vaulted ceiling. The false door from this chapel is in the Cairo museum and Dr Gabirela hopes that the restoration of the tomb will include putting this back in situ. They are extremely concerned about the cracks in the tomb, they are trying to consolidate them and also hope the removal of the houses will help.

Central Chamber
They found 400 stones, perhaps put there by Davies, that are not documented. Lots have colour and hieroglyphics. These pieces are now safe in a storage area. There are lots of poor people in the area and these stones mean money so they have to be stored carefully. The team is planning to publish the graffiti and exterior hieroglyphics. They also did some tests to see what cleaning would do. This season the first thing to do was to safe guard the roof as the fallen houses had put weight on the chambers. Previously they found that the iron beams supporting the roof had moved by 7cm in 2005. They tried to support them. The quality of the concrete on the roof was awful with no structural steel inside. They were able to put a boot through so had to remove and replace. While this work was going on the protected the walls with wood. They also raised the height of the protective wall. They have found more parts of the courtyard and expect to take another 5 – 6 years to complete their work.
Posted by Jane Akshar at 15:34

"Dr Gabirela showed a slide of the tomb with the Gurna houses above it and commented that she was glad these houses had now gone as they had lost objects to tomb robbers while they were there."


Very sad to read these words and see the photo accompanied the article together...
Like if somebody lost one of his leg by surviving a severe accident and people told him - just be happy about your life can be continued...

I am amazed by a number of aspects of this report.
Dr Gabirela implies that the Quurnawi who lived near the tomb were "tomb robbers". She has no proof of this, and any thief could have been Egyptian or foreign.
She is pleased that they have had their homes demolished. I wonder what she would feel like if people came and ejected her from her home and demolished it and relocated here in a small dwelling with no work. Perhaps it is a usual occurence in Mexico for local people to be moved from historic sites in this way.
And oddest of all, it is reported that,"They are extremely concerned about the cracks in the tomb, they are trying to consolidate them and also hope the removal of the houses will help." They were not concerned enough to stop bulldozers from working away on top of and around the tomb. It is not surprising that there were 'cracks' - there will have been more than cracks caused by the bulldozers and trucks of the last 3 years on the Theban Hills. Tomb roofs will have collapsed, walls will have fallen in, paintings are carvings wrecked. It is stunning to think that any archaeologist could say that the demolition of the house by bulldozers could have 'helped'.
Caroline Simpson
Qurna History Project