Left fairly early to go to the Valley of Kings crossed the Nile on the ferry. Visited Tut’s first, no camera’s allowed. Only the antechamber and burial chamber were open to the public. The burial chamber is several feet lower and therefore the mummy in the third coffin and sarcophagus is 2ft lower than the ante chamber, the wall paintings are more impressive and colour is brighter and it is larger. Ramses VI was a large and multiple roomed tomb, predominately yellow and black. Blue/black ceiling with numerous stars and Nut holding up the sky, baboons etc. Pharaoh being judged. Burial chamber has a shelf running round about 10 ft wide. There is a big hole with the remnants of the sarcophagus. A very interesting tomb. Amenophis II. This had a long corridor leading to a chasm. The burial chamber is covered with inscriptions from the Book of the Dead and little else. The sarcophagus is in a hole at the end of the chamber, dropped about 6-10ft 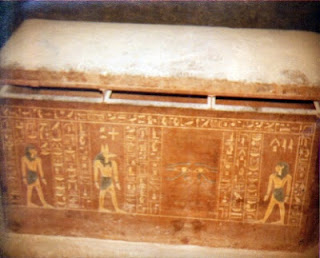 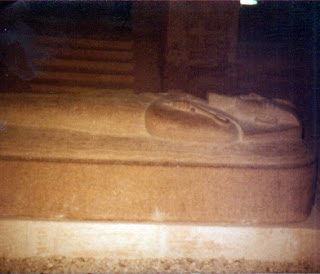 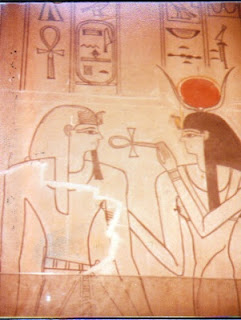 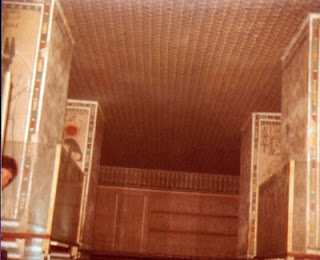 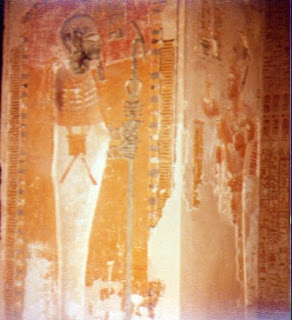 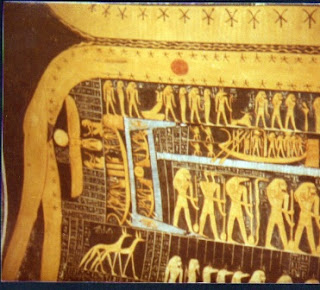 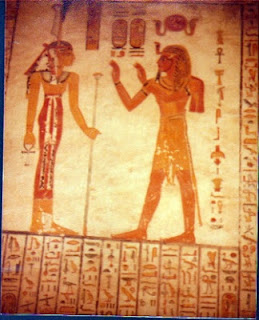 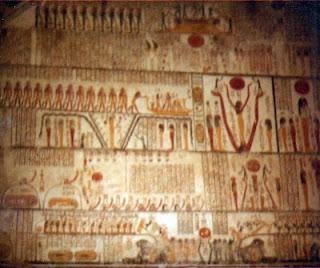 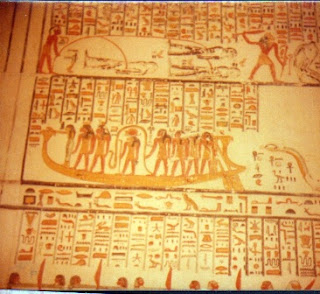 Figure 42 Valley of Kings photos
Above are various photos I took inside the tombs in both 1979 and 1981. I am sorry they are so awful my camera wasn’t very good. By the time I had a decent camera they stopped you taking photos. Also it cost so much to have things developed. However if you really want to know what the tombs look like, go to the Theban Mapping project website http://www.thebanmappingproject.com/ that has all the tombs, descriptions, plans and pictures. 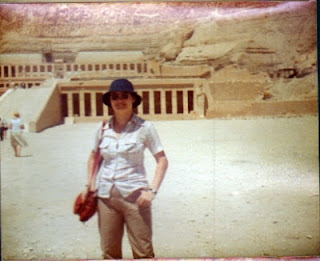 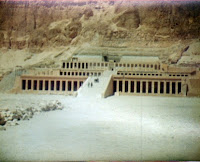 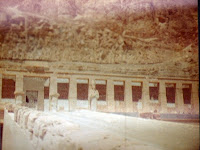 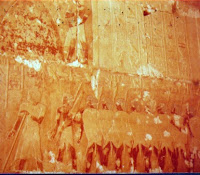 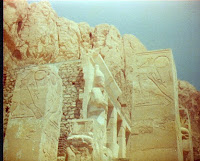 
This built by Senenmut who was also the tutor of her daughter. Popularly thought to be her lover and father of her child. Figure 44 second terrace at Hatshepsut The temple is outwardly very impressive with large courtyards. However the buildings are only about 2 pillars deep and there is no sanctuary of rooms. There was a picture of Tuthmosis III undamaged in the Anubis chapel which had stars n the ceiling. Figure 45 Anubis Chapel The walls are covered with inscriptions justifying her accession. Bedroom scenes with the God and her mother. Not allowed on top terrace. Figure 46 Punt and Hathor Capitals Acknowledging her expedition to Punt, transport of the obelisks. There are two courts and Hathor capitals. This temple was badly damaged by Tuthmosis III. Cartouches, figures& faces all effaced. Got picture I hope of little carving of Senenmut hidden by chapel now in Cairo and Tuthmosis III offering to Horus. 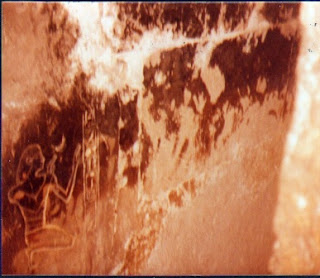 Figure 47 Senenmut
Outside a man showed us a mummy, which was unusual. Got a good look at Mentuhotep from a distance. 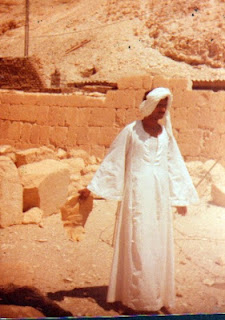 Figure 48 man with a mummy

Honestly I am blushing, poor Hatshepsut she doesn’t get much glory from me. At that time the top terrace was not restored and open and even the second terrace wasn’t fully restored. So perhaps I can be forgiven. Unlike today when the temple is one of the "must sees", back then it was just one in a series of mortuary temples we visited. 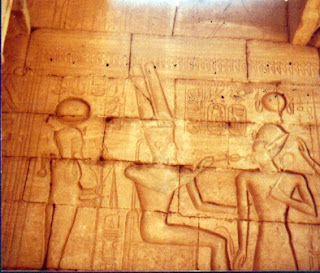 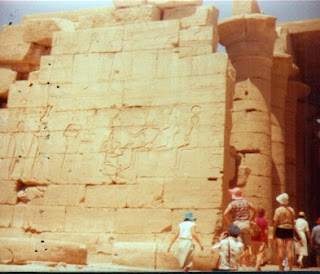 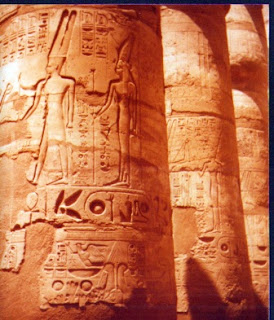 Ramasseum, mortuary temple of Ramses II 200ft wide 330 ft deep, shows his battle of Kadesh. First court contains remains of the biggest state made of one piece of granite, now broken into many pieces and lying on its back. Small halls has astrological ceiling. There are many statues with faces & crown destroyed. Figure 49 Ramasseum Medinet Habu built by many pharaohs including Ramses III whose mortuary temple it is. It was a very important building and was used as an archive. Ramses III is shown slaughtering groups of prisoners who he holds by the hair. 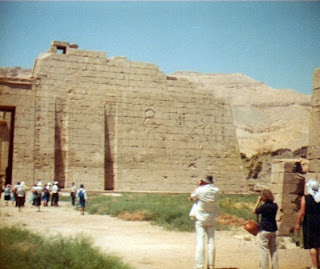 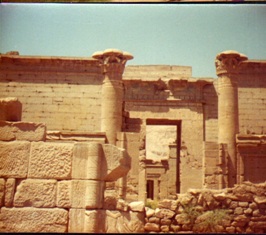 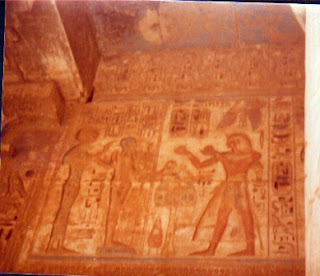 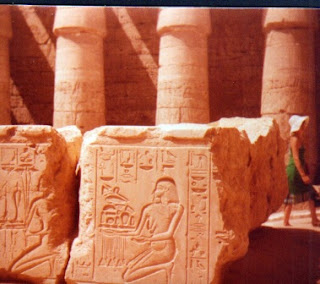 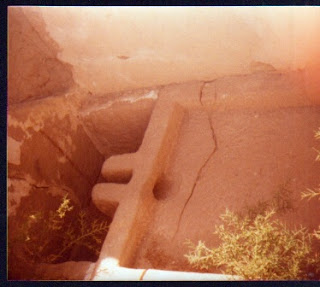 There was also a hunting scene and we saw his toilet. 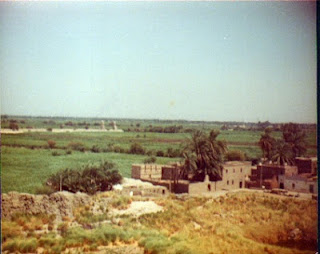 Figure 52 view from top of pylon


We climbed to the tYouop of the pylon and took photos of the colossus of Memnon. Drove past the colossus of Memnon, these were a pair of which one was supposed to speak but this stopped after it was repaired. They stand in front of the unrecognisable remains of the mortuary temple of Amenhotep III. Returned to hotel for lunch and a siesta, it is so hot the a/c does not work so I soaked a sheet in cold water and put it over the top to keep cool. After that we went shopping and I ordered a galabeya at 6:30 which was delivered at 10 and cost 13LE.

You are not allowed to climb inside the pylon anymore, which is a shame.
Posted by Jane Akshar at 09:00