Last night saw the start of this film festival and what a great start it was. The film Salmon Fishing in the Yemen was excellent, totally recommend you see that.

The ticket said doors closed at 6:30 so we all got there early. I think it was a printing mistake and should have said door OPEN at 6:30. There were lots of glamourous ladies there. 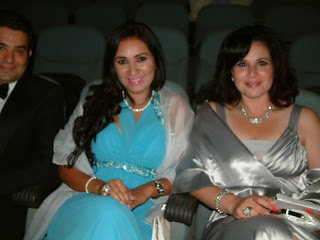 And some not so glamourous, yes it is me!!! in purple top right. You can see how crowded it was 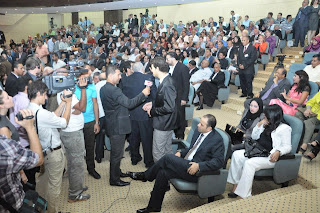 Due to start 7 of course it didn't and we started running a sweep of what time it would start. I was closest with 7:35 so Egyptian. It opened with a dancing display, totally different from the standard Sufi dancing, these were three young ladies and their dance was very enjoyable. I have two video clips

Most speakers spoke only in Arabic and a very slick and charming presentor gave an English translation. It is hoped that this is the start of making an annual event as well as bring more modern culture to this historic town. That is a very laudable idea and it would be nice for Luxor to have some good entertainment in the evening. The governor did speak in English you can see him in this clip 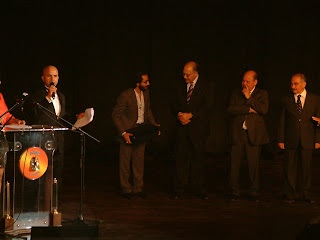 The speakers made up for the delayed start and much to my surprise the film started on time. It was Salmon Fishing in the Yemen and really enjoyable.
Posted by Jane Akshar at 17:52

Email ThisBlogThis!Share to TwitterShare to FacebookShare to Pinterest
Labels: Film