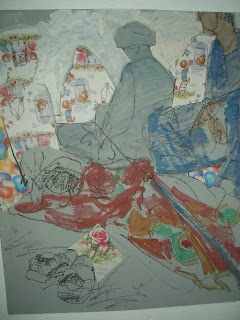 Thank you so much for this contribution from Dr Klaus Muller

Egyptian artist, Ammar Abo Baker with one of his latest works
Collage by Ammar

All great events of modern Egyptian art take place in the capital Cairo. Well, not always! The exception to the rule was a magic vernissage in Luxor's Marsam Hotel on 15th January. It was a symphony of paintings, children's and adults' drawings, primitive art, sculptures, photos and a documentary film. The Marsam Hotel on the Westbank, more famous as "Sheikh Ali's Hotel" and it's lovely garden gave a nice frame for the Egyptians and expats of a dozen nationalities who attended – just before the archeologists of the Italien, Belgian and Spanish mission will take over this meeting point for artists and egyptologists for the usual excavation campaign mid-January to mid-April. 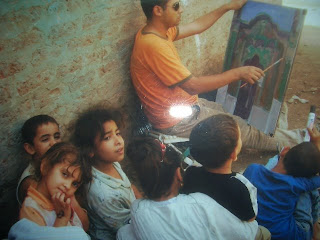 The folk music, played on traditional instruments by Awlad Manmool and his group was enthusiastically applauded.
The exhibition was organized by the "Art From People to People Movement", an international initiative to break the idiological and geographic barriers and bring people together through art. The members keep the door wide open to anyone who would like to get involved. There are the novelist Assem Abd Alhamed and the painters Dr. Mohamed Oraby, Prof. Roger Dale, Ammar Abo Baker, Ashraf El Sweeny. I personally liked the genial hand of the promising painter Ammar Abo Baker – particularly the expressiveness and vigor of his portraits – and his strong personal radiation. 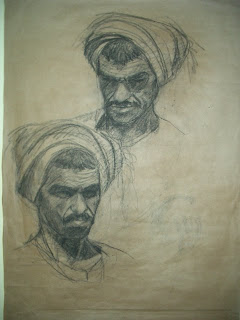 He has already passed on much of his spectacular style to his student Ashraf El Sweeny (photos of old men above). Being very fond of kids, I spent a long time in front of the impressing Mahrosa photos of a painter with some youngsters and of children holding candles, their faces varying from those of imps to little saints (photos below).
The event was one of the few perfect things in our imperfect world.
The exhibition will last until 18th January. 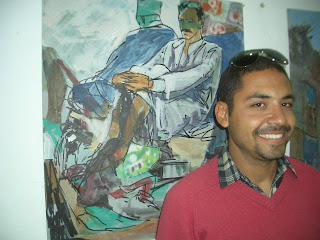