A big thank you to Mr Mansour Boraik for suggesting I write about this. This photo of Mansour was taken on the day of the announcement in the Valley of Kings. Mr Mansour is very supportive of my blog Luxor News and I really appreciate his help and ideas. 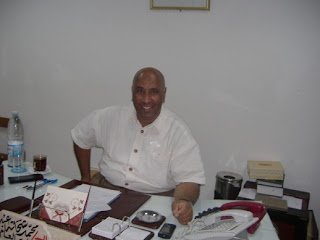 Thanks also to Mr Mohammed Shet the Director of the Mummification museum for letting me take photos. I wish I had a better camera but I do hope you get an idea of the quality of display in the museum.

It was only fitting that something so unique coming out of KV63 should remain in Luxor. KV63 is the most recent tomb discovered in the Valley of Kings and the team have been busy last season 2008/2009 investigating the many huge storage jars. There have been all sorts of things found within these and I am sure we will see some great analysis coming out deciding how, why and where these various articles were used. 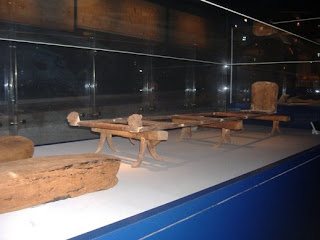 One object, actually it was lots of bits, was found with these storage jars, is the Mummification Bed.

It has been put on display with 2 pillows also found in the tomb, it is interesting to speculate just what part they played.

There is no evidence of any embalming materials on the bed so we do not believe it was used during the gory bits of mummification but that was only part of the process, evisceration, desiccation with natron and partial rehydration with oils. There was also bandaging and of course the religious ceremonies and it is suspected that this is where this bed was used. 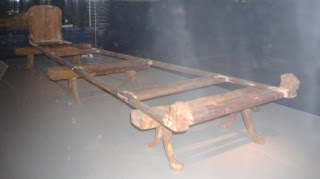 From its size it would appear to be for the youth coffin, so not a full adult nor a child. 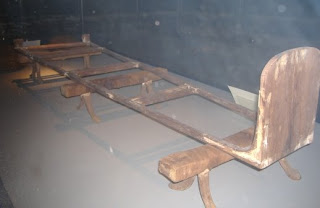 It is made of wood, with a foot board and two lovely lions heads at the head. 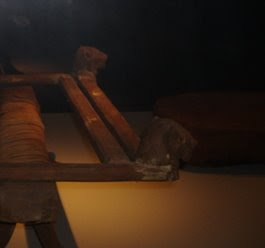 The KV63 team reassembled it with suggestions from Dr Zahi Hawass and it is now on display in Luxor’s Mummification Museum. A most suitable place as this is a modern museum with good display cabinets, labelling, lighting and humidity controls.

Edited here is a link to Dr Zahi Hawass's press release on the bed http://www.drhawass.com/blog/press-release-wooden-pieces-discovered-kv63-prove-be-mummification-bed
Posted by Jane Akshar at 21:03

Email ThisBlogThis!Share to TwitterShare to FacebookShare to Pinterest
Labels: KV63

Great post! I am glad to see the bed and two pillows in the museum of mummification but I was wondering is there any idea of how many of these mummification beds that have been found?

I should have said unique rather than rare as it is the only one. I will change the post

Please thank Mr Mohammed Shet. It'd good to have museum directors supportive of blogs. The role of blogs in increasing visitors to sites and musueams is often not appreciated and his support of your blog is to be welcomed and applauded. It's also great to have some new photos. I'll put a link at http://KV64.info so my own readers come across to see them.

The SCA in Luxor are all massive supportive of my blog. Giving me permission to go places. Helping me get photos as and visits. Publicising their lecture etc. Mansoura, Ibrahim and Mohammed are all hugely behind me and encouraging. My blog would be nothing without this, and Dr Sabry especially and Dr Zahi I cannot thank enough.