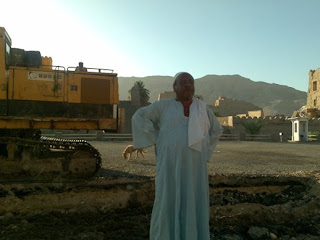 Good news about the problems of the rising of the water table and destruction of the monuments. The problems is that with the building of the Aswan Dam water is now available to the farmer all year round. The temples were built taking into account they would be flooded 3 months of the year and bone dry for the other 9 months. The farmer would have one crop a year, he would sow his seed as the waters of the inundation receded and the yearly crop would grow and be harvested.

Now water is available all year round. The farmer flood irrigates his field and can crop 2 to 3 times a year. This has risen the water table and the temple foundations how sit in water all year round. This is decaying the stone and sand stone becomes sand again. Restoration work at Medinet Habu and Seti I temple done recently is already affected and the original temples are in a dangerous and hazardous situation. 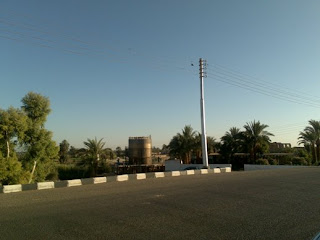 Now it is the West Banks turn, I understand the proposal is to have a pipe going along the West Bank parallel to the Nile from Seti temple at Gurna to Medinet Habu. This pipe would be between the cultivation and the temples. The other side of the temples is the desert.

Work has now started, these photos show the construction at the Ramasseum and Medinet Habu. Hopefully this will save the temples.
Posted by Jane Akshar at 10:24

One wonders how long this dance between the monuments and the bread basket can continue. To my knowledge the Aswan damn needs to be raised or it will just silt up, bringing these same problems to a higher level.

The same silt which use to flow into the Mediterranean and now does not because of the damn with the other result being the destruction of the fishing industry on the Egyptian Mediteranean.

It is an impossible choice between the great supplier of food or the priceless and unique ancient society.