A morning with Dr Andrzej Cwiek

I was privileged and lucky enough to be taken round Deir el Bahri by Dr Andrzej Cwiek the Assistant director of the Polish Mission. I made sure the previous day that the inspectorate knew I was coming, this is really important as when I turned up on site their local inspector was freaking out. The knowledge that I was there with permission from Moustafa Wazery smoothed all that out. Permission is god here. The director of the site took me to the Punt portico where Dr Andrzej was photographing. 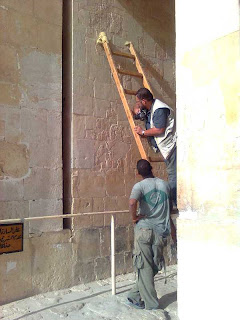 He enhanced the lecture from Saturday by showing me the places where erasure had happened and how it had been done by different hands. Honestly it was so obvious once you have been shown. It helped that he had a mirror to shine the light against the decoration and we were under the barrier. But once it has been pointed out it is so obvious even when this is taken away.

We then went to the Hatshepsut chapel which is actually their workshop. I am afraid I am not going to remember everything he said, there was so much but I will do my best. First there were official versus unofficial erasures. If something is removed only to the reach of a normal man but exactly the same picture higher up is left untouched then this is unofficial damage. If they had really wanted to remove it higher up they would have done. He explained that this had occurred at the step pyramid where the edges are removed off the niches but only to the reach of a normal man. I loved some of his terms waiters, menu instead of offering bearers and offering list, he does it as a little bit of humour.

He also mentioned about the use of rose pink on the skin of royal women and we had a big chat about yellow being used on men when they weren’t reckoned to be virile like old men and Syrians! This rose pink seems to have been favoured at first by Hatshepsut but then she obviously decided it was not kingly enough and the skin was repainted red.

There is also the use of white and yellow head cloths as the sun and the moon, in the chapel Hatshepsut had to be the most important so on her side she is shown first wearing a white head cloth in front of Amun and then wearing a yellow nemes head cloth in front of Amun. So the closest to Amun is the sun but on the other side the closest Tuthmoside figure to Amun is wearing a white head cloth and the one behind, the complimentary sun figure hasn’t got Amun in the picture. It is all so subtle but so obvious once you are shown.

But when Dr Andrzej gets on to hieroglyphs omg, the moment his stuff gets published go out and get a copy, some of the interupretations etc are amazing. There is no point in my trying to explain without pictures and I didn’t feel I ought to ask to take pictures before publication. Anyway I don’t think my memory card is that big!!

I saw Senenmut pictures and erasures and interestingly enough one of these would not have been hidden when the door was opened as the door hinge was on the other side. 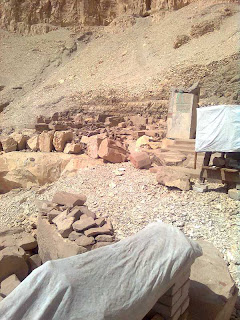 We clambered up to the Tuthmosis III temple which was so much bigger than I imagined., I had seen the reconstructions but when you are looking from below it doesn’t seem big enough but when you are up there. It is quite amazing how big it was. It was a cult temple used for the worship of Amun and Hathor and the Beautiful Feast of the Valley, no mortuary aspect as he had his mortuary temple down below in the northern Assasif. Quite ruined obviously but there is quite a lot up there. 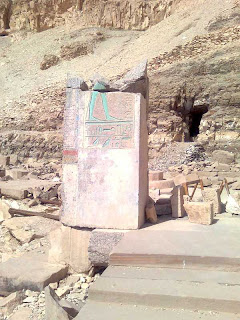 My head is literally buzzing from everything he told me, why Anubis was erased, why the royal ka wasn’t, how tiny scraps of stone from statues gives them a clue about the original placement, how uraeus were removed making statues non royal, the Ptolemaic chapel at the back of the Amun chapel with statues of Amenhotep son of Hapu and Imhotep with ladies of their household with the most improbably boobs. I felt like I had never been to the temple and just seen a completely new site. 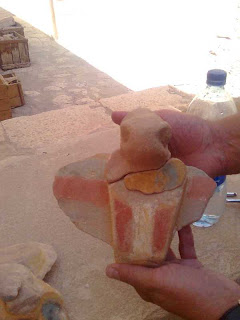 Thank you Dr Andrzej and Moustafa Wazery so much
Posted by Jane Akshar at 18:36

Email ThisBlogThis!Share to TwitterShare to FacebookShare to Pinterest
Labels: Hatshepsut

Fantastic blog Jane. Thanks for sharing. Makes me wish I was back in Luxor now and not have to wait another 3 months!!

What a great experience, Jane! Thanks for sharing it and making us feel like we were there too.

Fantastic Jane, look forward to hearing it in person over a cold beer!

Thanks for the information. I have always been interested in the Thutmose III temple there.

Great stuff! And so wonderful to hear what he is up to (he will be speaking at our conference in Swansea in May). Love the picture of the cobra frieze too.

Jane, great share and you made me smile in some of the ways you described or expressed. Wonderful work dear, and looking forward!