Checked in at Heathrow at 1:00. All luggage was searched so did not get through to departure lounge until 2:30, bought duty free and flight was called.


Seat above wing behind Joan and Monica & next to Egyptian called Sammy. Unfortunately flight was delayed by two hours by Heathrow but no reason given. Temperature rose rapidly, could not imagine how long delays such as hijacking are coped with.  Eventually took off at 4:50 was not nervous. Once we were flying air conditioning cooled us down very quickly.  Meal served after approx 1 hour salad meat peas pasta and sauce crème caramel cheese and biscuits. No alcohol but we were served with orange juice & coffee whilst waiting for departure and Pepsi & coffee during the meal. Crew very cheerful & pleasant much more so than when flew to Zambia. Coped with delay at Heathrow very well. Although I had no reading material or drinks the time passed quite quickly. Landing at Cairo quite smooth, met by Eastmar rep. These are Bales agents in Cairo. He directed us to passport control where visas were checked. No health or wealth check fortunately. Collected luggage using trolleys went past 4 or 5 little kiosks which were banks and then exited passed a crowd of people presumable waiting for friends and relatives. Luggage loaded on to two mini buses by various men & boys Eastmar rep paid tips. Then a half hour drive to the hotel.  Very little to see until Cairo itself reached. They drive on the right. Lightening seems to be leased to various companies who put up their signs. Arrived at the Windsor Hotel at 12, hotel situated in a back street in the centre of town. Not a very imposing facade. Entry hall like something out of a book, tiny with some solid wood settees & tables, a four person lift and a wooden reception with pigeon holes etc. Allocated room to room 30 with Marjory Charsley.

I have to admit reading this amused me enormously, bless naive 24 year old me. I had not stayed in many hotels or flown much so this was all new to me. Even airport meals and trolleys were something to write about.
There had been several hijackings and these unnerved the travelling public. According to Wikipedia there were 33 hijackings during the 1970’s including the Entebbe incident which was made into a film. Ayatollah Khomeini and Saddam Hussein were starting their careers with hostage taking and violence. IRA bombings, Mountbatten had just been buried. So travel then was a lot scarier, especially if you were flying near the Middle East. 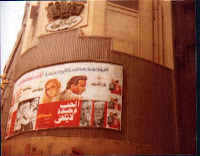 Back then a visa to Egypt had to be obtained in advance by personal application over two days, submission on one morning and pick up the following day in the afternoon, the travel agents did this. Back then it cost £2.55, nowadays it costs $15 USD and most tourists buy it on arrival. 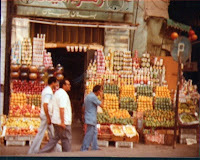 I had my currency stuffed in my bra and was very nervous it would be discovered but I got away with it, the exchange rate was about 3:1 back then. Currency was pounds, piastras and mills so prices were displayed as 12,99.12 which is why you still see prices as 12,99 even though mills have disappeared now.  It is a bit confusing if you don't know that history. I refer to piastras as pts and Egyptian pounds as LE in the diary. 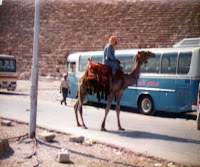 
The Windsor Hotel is still in Cairo, when I stayed there it was decorated to look like a Swiss Chalet. Michael Palin stayed at the Windsor during the filing of his series "Around the World in 80 Days". It used to be a colonial officers' club and still had that atmosphere. Nowadays it is Wi-Fi enabled, there is a metro nearby and you can see reviews on the internet. The Barrel Bar is still there but you should expect pay a lot more for a beer in a hotel 15-25Le are usual prices rather than 80pt back then. 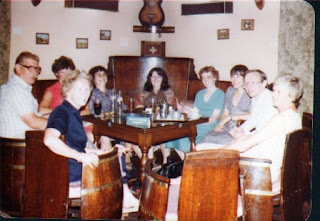