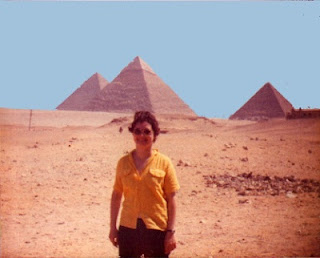 
Went to Giza, the outside of the pyramids, as you approach, is very deceptive as it looks as though there are steps leading up, it is only when are close to that you realise that those steps are several feet high. Climbing is no longer allowed. As we were going to the entrance a man grabbed my boob which slightly destroyed the moment. Back at the hotel Marjory who is 60 also said she had been touched so it obviously wasn’t a compliment. We visited the inside of only 1, the great pyramid of Cheops, Khufu. 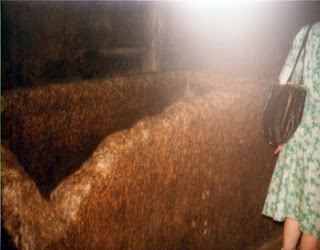 
The inside is not inscribed or coloured and is quite dark. A corridor leading to so called Queens Chamber then up into the burial chamber. The sarcophagus still remains but it was found empty. There are two air vents leading to the top of the pyramid used by the Ka. The outside is almost too large to take in and certainly too large for the camera frame. 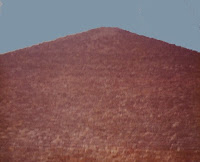 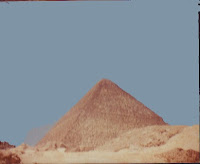 The guide we were with was not instructive but just showed us places to take photos from.  We were taken round illegally to several mastabas around the bottom of the pyramids. I tried to take photos but without flash I don’t think these will be successful.


I can’t remember the names if indeed we were told however one was in superb condition and very lovely, quite small i.e. would fit in out lounge. 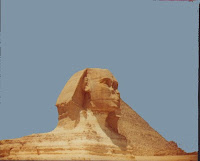 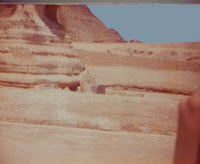 
We then went to the valley temple and sphinx of Chephren Khafra. The valley temple was originally linked to the pyramid by a causeway which is no longer in existence. The temple was made of granite and has many stations and places presumably where the priests washed themselves and is made in an open style and has rooms in groups of 6, 3 each for north and south, for the storage of funerary equipment.The sphinx is thought to be an out crop of soft stone left after quarrying because it was not suitable for building purposes. It is generally agreed that the head on the lion body represents Khafra as the sun god Ra-Horakheti. It guards the western desert and according to tradition there should be another sphinx one the eastern side of the Nile valley. Between the paws is the famous dreams stele of Tuthmosis IV. Third pyramid is of Menkaure.


After Giza we returned to Cairo and had lunch at the Hilton I has something called Basterma, Monica was feeling ill so returned to hotel with her until ready for the sleeper to Luxor which left at 6:30. Very hot on train as the air conditioning did not operate whilst we were stationary. There was a sign that said Budapest Railway Company 1880 and we don’t think they had cleaned it since then. Dinner was hilarious, soup in a dining car on a rocking train, it was going everywhere except my mouth. I have no idea how the waiter managed to serve it out of the tureen.  There were little rails around the table to stop things sliding off.  Sleeper very small and dirty, shared with sue and I had lower bunk.

I do remember Marjory being quite chuffed at being goosed at the pyramids, just shows they have been doing it for ever. We did have quite a lot of sickness in our group, standards were different back then. They have much improved but still the change can do people in, different climate, food etc. I will say since that trip I have never been ill on Egyptian holiday. I think a lot of it is down to dehydration to be honest. They replaced the trains about 1980 with soulless cabins and meals like airplane food. The dining car was much more fun. 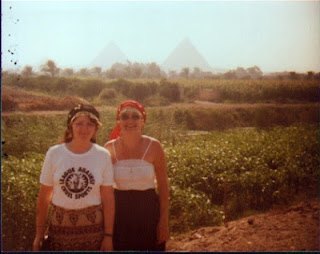