OK I am embarrassed about the inaccuracies in the following entries but I want you to read it as I wrote it at the time. I blame the guide lol But note from the pictures how little it has changed.
I did not sleep very well on the train, too interrupted, we left the train at Luxor 5:30 and went to hotel and had breakfast then went to Karnak, horse buggies were hired to take us there.
Firstly there is the quay where the Nile used to reach for the purpose of unloading stone. There is a main termous wall enclosing the majority of the complex although there are some temples with their own complexes outside. The main entrance is at the west, there is a lane with ram headed sphinxes with Osirid figures of Ramses between their paws, one or two are almost complete but many are very damaged. 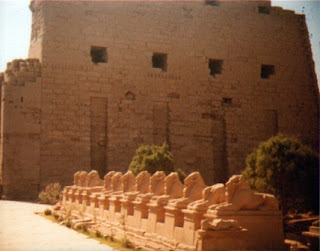 Figure 30 Sphinx Alley in front of Karnak
The first pylon is unfinished and has niches for flag poles and windows to light the stairway in the interior. First court of kings 22nd dynasty, walled with – to the left a shrine of Seti II for the barques of Amun Mut and Khonsu. Only one column of a colonnade of Taharqa remains. Mud brick ramp used in the building of the pylon still remains. 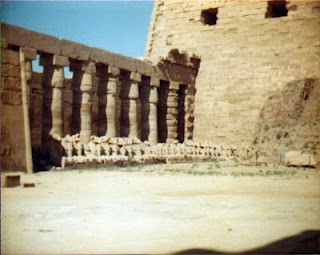 Figure 31 Back of 1st Pylon


Hypostyle court with central columns with floral capitals, statue of Ramses. Second pylon by Horemheb then hypostyle hall, meant to represent a forest with enormous number of columns, this was so the desert demons would not penetrate. 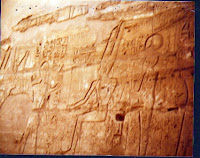 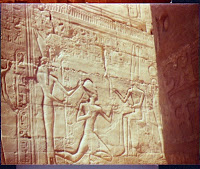 Figure 32 Reliefs in the Hypostyle Hall
There are main reliefs and Ramses usurped some of these especially on the columns, his cartouches are several inches deeper than the reliefs. The colour is still very good. Especially on the underside of the roofing slabs. I must admit I got very emotional, I just could not believe I was really here and it was nothing like I thought it would . 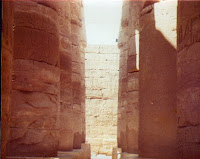 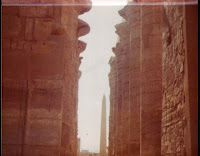 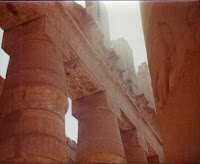 Figure 33 Hypostyle Hall
The side wall on the right Bubastis gate with names of towns won by Shoshenq I (from bible).
Third pylon almost destroyed the obelisk of Tuthmosis III beyond 4th pylon obelisk of Hatshepsut. Statue of Tutankhamen. 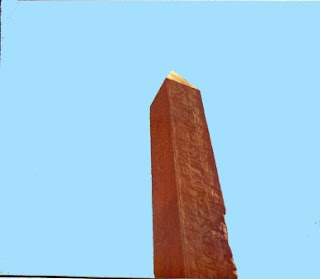 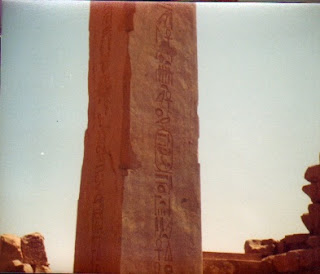 Then to central shrine with the pillars of upper and lower Egypt.  Coloured scenes of boats Phillip Arrideus. 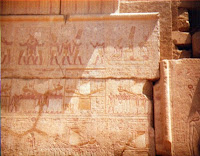 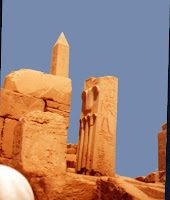 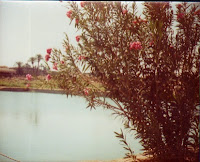 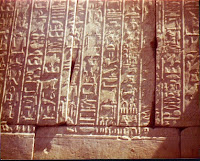 Figure 36 by the Sacred Lake
Beautiful hieroglyphics near sacred lake.  Got a photo of me with Amehotep III 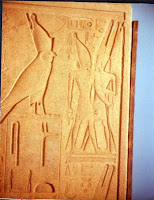 
Top of second Hatshepsut obelisk lying on the ground. Pillar of Amenhotep III topped with a scarab.
Also rubbish tip for statues near to four statues of various pharaohs including Ramses III Ramses Ii Seti I Shoshenq I Amenhotep I II III Tuthmosis I II Tutankhamen 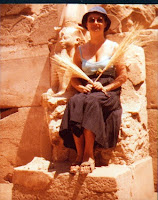 Figure 38 Tourist at Karnak
We went out towards the north to the temple of Ptah and on the way found this statue that looked as though it was being restored. Temple of Ptah with statue of Sekhmet lit by hole in ceiling like a spotlight. 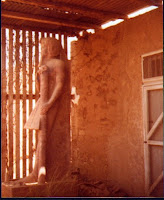 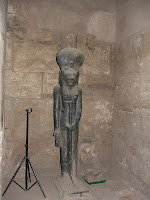 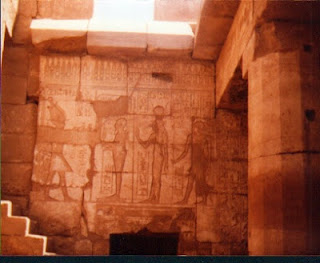 Our guide sneaked into the area where they are doing some restoration work; Saw shrine of Senusret I, Amenhotep II lovely photos, also blocks of Hatshepsut. 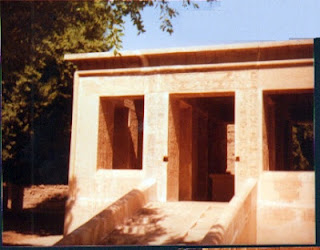 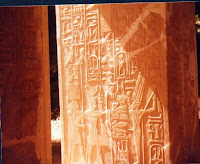 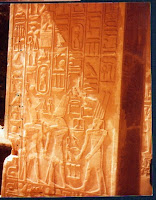 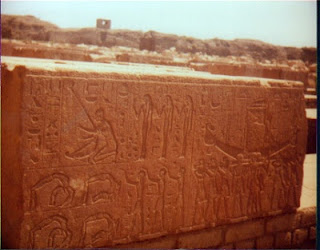 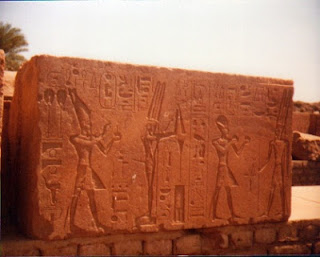 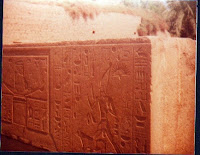 Figure 40 Open Air Museum
When you went up the steps you could see this gateway in the distance, 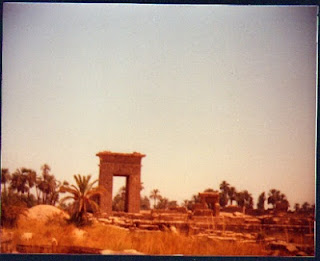 Figure 41 Karnak Gateway
Akhenaton also built a temple here to Re at the far east of the temple but this is totally destroyed. There is so much to say about this place but most is indescribable.
Lunch was courgettes in cream, chicken, veg salad and water melon. Now allocated our rooms, ours does not have a shower but we share Hazel and Muriel’s. Two hand basin and a huge room with three beds, 4 seat settee and 2 large arm chairs doors onto a balcony and non working air conditioning. It is much quieter here and more relaxed. I think everyone prefers Luxor to Cairo it is so much less commercialised. I got my shoes cleaned in about 3 minutes. Had a sleep in the afternoon and went to the Son el Lumiere at Karnack at 6.00. Only Bernard, Dick, Monica, Betty, Sue, Joan and myself wanted to go as the others had been disappointed by Giza so we hired two buggies and paid entrance ourselves. It was incredible, the commentary was fairly accurate but Karnak lends itself to this so much better, it was processional, ending at a terrace overlooking the sacred lake facing the first pylon. At some points it was just moonlight and it was stunning.
It is fair to say that Karnak made the most impact on me throughout the tour, I can remember standing there with my jaw dropped and just staring; I think I even pinched myself at one point. Isn’t it fabulous the see blocks from the Red Chapel of Hatshepsut before they were assembled. There were only three hotels in Luxor then, the Savoy, the Winter Palace and the Luxor Hotel where we stayed. Also only 5 taxis back then, which is why we hired buggies properly called Caleches. I still like the sound and light at Karnak BTW and still think Luxor is better than Cairo
Posted by Jane Akshar at 09:00