Abydos, we left very early as it is a long journey. Very hot as the coach has no air conditioning so the moment we arrived everyone dashed to the cafe for a cold drinks. We saw a real live camel train along the road; it was interesting to see ordinary people and the life along the road. 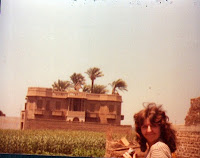 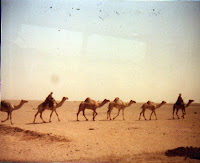 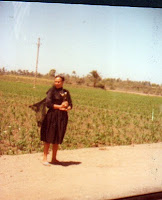 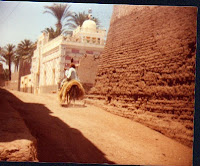 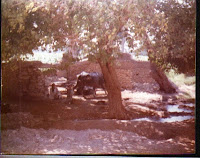 You can still see sights like this along the road, working shaduf’s water wheels, posh villas, little mosques.
Figure 53 Road to Abydos

This was the centre for the Osiris cult as an important part of him was buried here. Conflict between whether that was the head or penis. Went round temple and saw all chapels Osiris, Isis didn’t see Seti and Ptah as these are closed off. 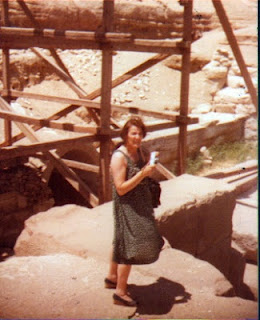 As you go through the temple to reach this older part you pass a king list compiled by Seti I. At right angles to this is a scene of Seti showing his son Ramses how to do the Heb Seb festival. Also saw temple of Ramses II, the walls are only about 5-7ft high but the reliefs are in excellent condition, showing the king, fully coloured, with slightly pale pick legs under his skirt. Unusual bull headed god which has yet to be named. Offering scene carrying the king’s statue. Black granite gateway with symbol for a million of years. Three statues to be named. 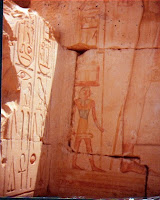 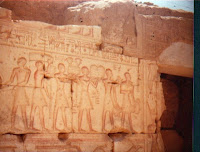 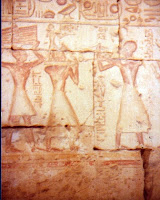 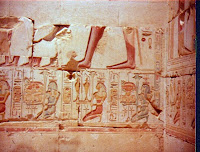 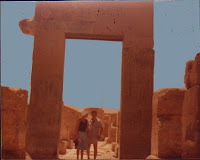 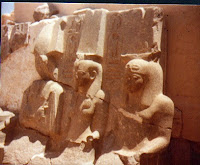 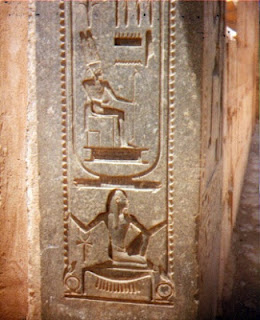 We then drove to Dendera which is a Ptolemaic temple. Part of which was built by Cleopatra showing herself as Hathor/Isis. This was very damaged by Christians. There are a great many secret and hidden chambers. The main hall has columns with Hathor capitals. Saw zodiac ceiling, original in the Louvre and outside scene of various crowns. Also looked at birth house of Augustus, thought scenes looked awful as they are so fancy like icing on a cake.

I have to admit to still find Ptolemaic decoration too busy, every inch of space seems covered. I much prefer older decorative styles. Lots of people miss the Ramses II temple when they go to Abydos but it is really lovely, he used his fathers craftsmen and the style is much more subtle than his later work when he just want quantity in stead of quality. 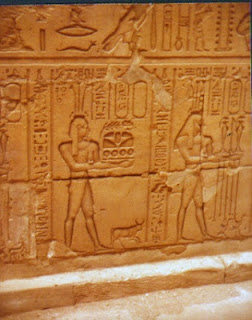 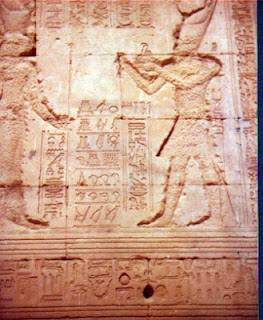 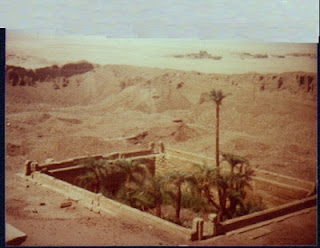 Returned to the hotel at 2pm. This was due to the journey not the visiting time which was quite quick. Betty saw a baby crocodile along the road. In the afternoon we went on a felucca but there was very little wind so we rowed mostly. We wanted to trail our hands in the water but didn’t dare. 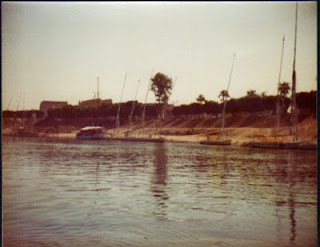 We were absolutely terrified of getting the bilharzia worm and didn’t realise fast moving water is fine, it is stagnant water you have to be careful of. See Luxor temple in the photo before the building of the Corniche 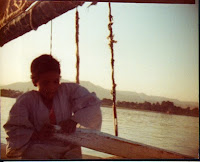 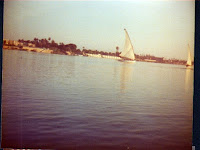 Figure 57 Felucca on the Nile
Posted by Jane Akshar at 09:00