Figure 69 Local girls(!) in front of pyramids
Up at 7:00 to go to the Fayum. Started at the pyramid of Medium so called straight edge pyramid. The owner is unidentified as the stele are uninscribed. It was first thought to belong to Snefru because of some graffiti found there. But two other pyramids have definitely been allocated to him so it is unlikely he built a third. Probably started by Hori shows development from a step to true pyramid. It is likely that robbing of the casing by later pharaohs allowed inherent weaknesses to show and it collapsed leaving only the core. The mortuary temple is very pokey and small. The graffiti is just as you enter. Next to the pyramid is the mastaba from which the geese of Medium came from and Rahotep and Nofret. We passed the canal of Amenemhat I a drainage done in the Middle Kingdom. 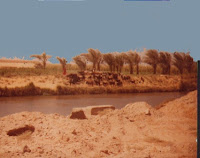 Figure 70 Canal of Amenemhat
Then to the mud brick pyramid of Amenemhat III. Middle Kingdom. Due to the heavy protection needed at the Nubian border at this time Middle Kingdom pharaohs did not have the man power to build solid pyramids so they built a core of mud brick with wooden supports and encased this in limestone. Subsequent pharaohs rob the outer casing for their own buildings and the wood rotted so only the mud brick was left. Attached to this pyramid is a large labyrinth also Roman remains pottery etc. 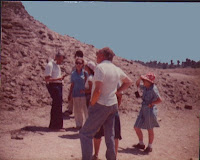 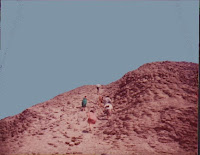 Figure 71 Pyramid of Amenemhat
Had lunch at a restaurant by a branch of the Nile reached there at 2pm and had lunch at 3pm. Came back to the hotel. Washed my hair which was filthy. All this constant showering has made my skin really smooth. We had an Egyptian dinner soul, ful stew, ful hamburgers with chips and banana fritters. We also arranged to have dinner at the Hilton tomorrow.