A tale of two museums

Not strictly Luxor news but I am sure you do not mind.

Firstly I have been affected by the internet cable problem and have had limited access for some time. Emails are taking days to get through; I do hope they fix it soon. As for surfing the net forget it.

Secondly I have been to Cairo and had a great couple of days there.

I spent the first day doing some business and then went to the Cairo Museum. I must admit it defeated me. I went round looking at my favourite things but every time they look shabbier and in urgent need of TLC it really disheartens you. The museum was built a long time ago and is in urgent need of some modern display cases above all else. It will be moving to its new home at Giza and the sooner the better as far as I can see. After a couple of hours I gave up, I just could not enjoy anything and just wanted to get a duster out. 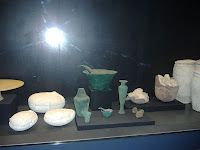 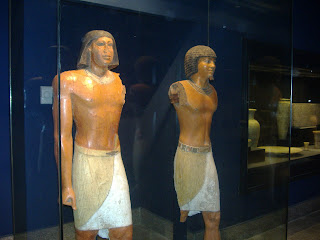 Contrast my next day when I went to Sakkara. I had been chatting to Dr Sabry of the SCA and when he heard I was going there he totally took over my plans. He gave me the contact details of the Director of Sakkara. Dr Osama who then made sure I was taken round by his staff. I had heard great things about the Imhotep museum and we were actually given a guided tour by its director Mr Ahmed. I do love an enthusiast and boy was he one. He obviously loves his museum and its collection and delighted in showing and explaining everything to us. After the previous day at Cairo it was such a joy to see things housed properly with great explanations and lightening. 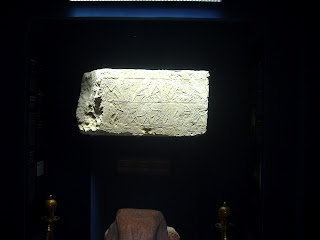 There was one particular display of the starving figures from Unas causeway which was lit in such a way that all the delicate relief work showed perfectly. I was so impressed. 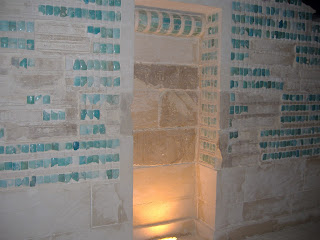 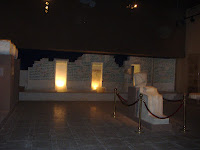 As for the walls from the underground chamber they were totally delicious. My photo shows them in all their glory. I was given such hope for the future of the treasures of Egypt by seeing what can be done in this wonderful museum. If you go to Sakkara you must see it. They also have a side room where they display the latest discoveries at Sakkara. This is an excellent idea because often you read about new things in the press but can not get a look at them.

We then went to the step pyramid itself, I think we chose the windiest day for years, the previous day I swear I felt sleet in central Cairo. It was so cold as well. I had not been there for decades and it was totally different for me. When I had visited before I had done so in the height of summer. The heat fries your brain and it is so hard to take things in. Going there in the cold meant you were able to really see things. IF you have a choice about which time of year you visit Egypt try and go for November to March, it is much more enjoyable. This time I really noticed the features preserved in stone that were originally in organic materials and they had copied. We had a really good guide provided by my Cairo partner Mohammed Zakaria; he took us round and even pointed out where he thinks there are some unexcavated ceramics. I do like it when you get an Egyptology guide who has learnt a language rather than language student who has painstakingly learnt a language. Mohammed was really knowledgeable. He had worked with Zahi Hawass briefly and what is more he spoke excellent English. He has only just started doing English tours as his best language is Italian. His wife who is also a tour guide does Japanese!!!

After going round the complex with him we then were taken to the tombs of the Butcher and the two brothers by one of the inspectors Mr Turkey (I do hope I have spelt all these names correctly). This was a treat for our guide as he had never been in these tombs, they are reserved for VIP’s we were told. Not quite sure how I managed to come into that category lol. The picture here shows the glyph that means hairdresser. 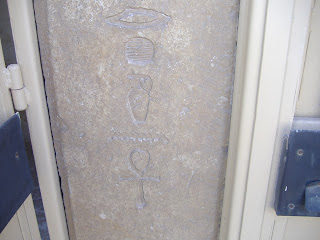 There were some fascinating scenes inside of pedicure, manicure and hairdressing. As well as a real women breast feeding, not a goddess and pharaoh but real life scene. Mr Turkey spent some time translating the hieroglyphics for us and really knew the tombs well. He pointed out that the access at the back (by which the tomb was discovered) was done by robbers who obviously knew exactly where the tomb was and probably built it. This tomb has the two men in a very affectionate pose and has had the nickname of the gay tomb but we were told it was nothing like that at all. Actually all over modern Egypt you see men kissing and hugging and this is normal friendliness (like a lot of Mediterranean countries) so it is felt the relationship was similar. The butchers tomb was unfinished and a great opportunity to see the progression of tomb carving and decorating. Some the glyphs were of the highest quality I have seen.

We finished off at Meriruka and Teti, the latter I had not been two before. It was a bit challenging to go down but not that bad. I had seen pyramid text in Unas years ago but not such lovely carved ones as these.

We were that about 5 hours and during that time we saw countless buses come and go and it seemed the average time was an hour. If you do go there INSIST on spending longer and don’t miss the museum. There is so much to see, we missed two other tombs that were open even with our extended stay.