Yes I made it up there. OK they got a taxi to take me way up the mountain, past the tomb of Menna and Mohammed Ismail and Michael Campbell-Smith dragged me up bits. Mohammed pulling and Michael pushing but I made it and it was worth it. 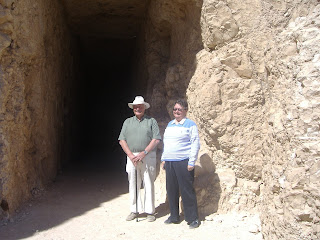 The views up there were fantastic.Firstly I had no idea how big it was and how much other stuff is up there.  This photo is looking up to the tomb top left and below bottom right is the hole that lead to his parents tomb. 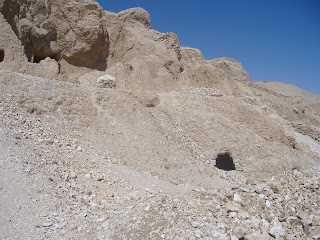 It is T shaped and size wise is not dissimilar to Rekhmire and the remaining colour is superb. One wonders what it must have looked like. Visiting it makes the theory of Francisco Martin Valentine that TT 353 is a cenotaph even more convincing. There is no way with a huge imposing tomb like this, overlooking Karnak and Deir el Bahri that you would swap it for a tiny place like TT353. That obviously has some secret and special purpose, nothing to do with the actual burial. 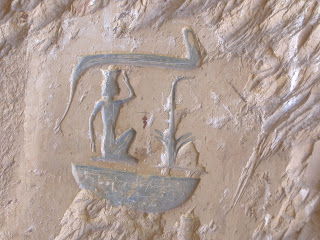 There were a number of places on the walls where glyphs had been carved in a steele arrangement and subsequently damage, presumably removing Senenmut’s name. Others had been left like this one. 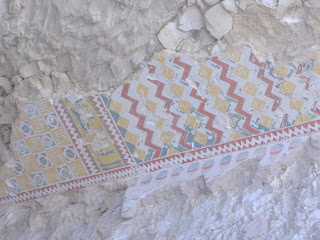 Lots of colour high up on the ceiling, really vivid and also in a little room to the side.

Around it there are carvings in the rock, one is a block statue of Senemut holding Neferrere and another is the figures of a man and women who is supposed to be Hatshepsut and Senenmut but we were not sure. Does anyone have any more information on these? (Found out later it was his brother Senemen). 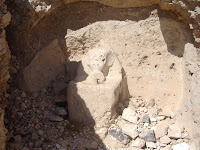 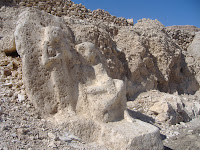 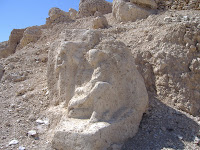 We actually climbed right to the top to the tomb of Sheik Abu Gurna which reminded me a lot of the tombs in Abu Hagag. The views are spectacular showing you all of the Assasif and Gurna as well as the temple of Mentuhotep and Hatshepsut. I had never seen them from that angle.So my legs are aching and I doubt I will climb there again but I have done it.

Edited I received an email from Dr Karl H Leser giving me the link to his website www.maat-ka-ra.de  . It has loads and loads of answers to the questions and is totally fascinating. In both German and English..

Email ThisBlogThis!Share to TwitterShare to FacebookShare to Pinterest
Labels: TT71